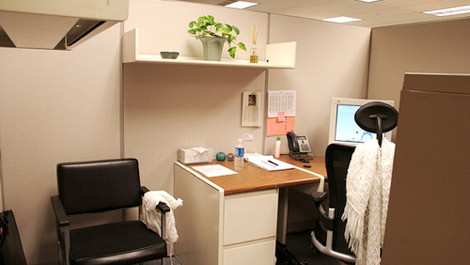 Image by flickr user revolutionarygirlImage by 20080711cubicle.jpg Imagine, you could have to come to this cubicle one less day a week.

Rep. Jerry Govan, D-Orangeburg, says high energy prices have reached the point when we need to start considering innovative ways to deal with it, such as instituting a four-day work week statewide. That's why he's pushing for the legislature to pass a statewide four-day work week. Oh, and he's looking into legislation on a four-day school week, as well, though it might be a bit tougher due to state law, which requires 180 school days per year.

From The Times and Democrat:

The question is: Will that translate to using that approach year-round?

“There are some things we can do to be proactive while federal government officials get their act together,” he said.

In addition to shorter school weeks, Govan also wants to reduce the speed limit on interstate highways to cut down on fuel consumption.

Last month, the state Dept. of Transportation instituted a voluntary four-day work week for its employees, and the University of South Carolina just started a pilot program involving that.

This has definitely become a trend nationwide, it seems, as energy prices continue to rise and have an effect on people's pocketbooks.

Generally speaking, people tend to be in favor of the four-day school/work week, reporting increased productivity and morale, though, like every issue, there are detractors, as well.