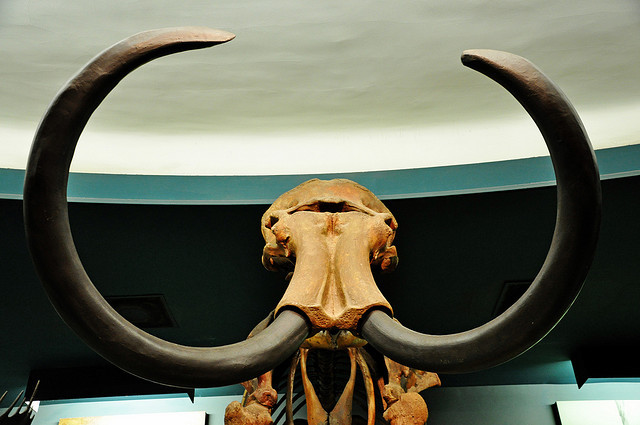 It all started simply enough, an 8 year old Lake City student named Olivia McConnell loved fossils and wanted South Carolina to have a state fossil. Olivia knew that a woolly mammoth was dug up in South Carolina so she wrote to Gov. Nikki Haley and other state lawmakers to lay out her case. The request of this little girl went on to become a bill allowing the mammoth to become the state's fossil and all was going well but then there was a snag

Thanks to a few 'highly religious' senators by adding text from the Bible into the bill. Text from the tinkered with bill reads as follows

But the original bill was pretty straight forward as SmithsonianMag.com points out:

"The original draft was simple enough: “Section 1-1-691. The Wooly Mammoth is designated as the official State Fossil of South Carolina.” But almost immediately the proposal ran into trouble. On a practical level: Senate Majority Leader Harvey Peeler objected strenuously to having any new state symbols enacted in a state that already has a state spider, state beverage and a state hospitality beverage among many others. On a philosophical level: proclaiming a state fossil in a state where there is still intense debate over teaching evolution as fact creates some problems."

One of the Senators objecting and adding religious subtext into the bill is Mike Fair who was one of the senators blocking evolution from South Carolina education standards, was quoted saying, "There had to be a cause to the beginning [...] It didn't happen accidentally". But, like with the education standards Fair relented.

Fair admits he did not understand who he was dealing with. Olivia and her family pushed back hard. They also believe in the Bible, but they don't want religion attached to a fossil law. Fair and the others were motivated to compromise.

"The fact that an 8-year-old was doing this was remarkable and something we should celebrate," Fair says.

Fair isn't the only senator causing a fuss over this simple bill wanted by an 8 year old girl, senator Kevin Bryant's version of the bill was struck down but mentioned Biblical creation more than the above version:

Bryant's original amendment to Olivia's bill quoted three verses from the King James version of the book of Genesis:

And God saw every thing that he had made, and, behold, it was very good. And the evening and the morning were the sixth day."

Other lawmakers tossed that amendment out because it introduced "new and independent matter."

The bill now remains sitting in committee and might more than likely won't get to this legislative session. None of these 'adult' shenanigans has swayed little Olivia's resolve on getting a state fossil, CBS news reports,