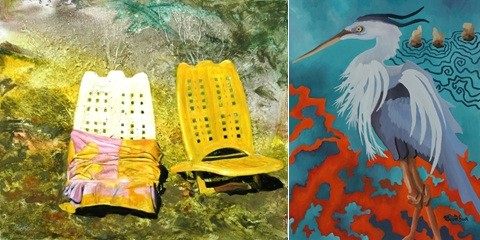 The City of North Charleston’s Cultural Arts Department is pleased to announce that mixed media paintings by local artist, Robert B. Reed, and oil paintings by Montgomery, Alabama, based artist, MaryAnn H. Goodhue, will be on exhibit at the North Charleston City Gallery from August 1-31, 2013. The artists will host a free public reception at the gallery on Thursday, August 1, from 5:00-7:00pm.

Outlying Shores: Annotations from Abroad by Robert B. Reed
The seven seas take on a new meaning in Outlying Shores: Annotations from Abroad, featuring the beach and shoreline resolutions of seasoned painter and world traveler, Robert B. Reed. For this exhibition, the artist offers a glimpse into a lifetime of experience abroad, highlighting seaside culture and some modes of human leisure prompted by and in face of the sea. The paintings are a mixture of symbols of the Western world that emulate serenity and leisure set within an unsure continuity that act like beacons of a sea culture; steadfast as a lighthouse but amorphous as the fog that surrounds it. Although each piece depicts different localities, which may be seen through delicate nuances of light and form, as a whole, the exhibition reveals how a common attitude can be shared by inhabitants of distant shores, which is a fundamental outlook for the prosperity of any port city in strengthening external bonds and relationships. “This series reflects my curiosity and attraction to one of many aspects of sea culture, which is an integral part of my life,” Reed says. “My interests have often been to depict what for me are visually poetic features of human involvement with our oceans and coastal sea areas, a way of measuring time, but more so, a way of measuring different cultures.”

Although not a native to Charleston, Reed is an adopted son returning to one of the localities where he had spent time as a child nurturing his attraction for the sea. He was born in Key West, Florida, and has lived in many different places in the United States, growing up mainly in Hawaii and California. He spent a major part of his life traveling the world, eventually using Tuscany as his home base. He studied at the Accademia di Belle Arti di Firenze from 1981 to 1985, receiving a Diploma in Painting from this Italian State Institute, and was accepted with a scholarship into a Masters of Fine Arts program at the University of Notre Dame, Indiana,  in 1988. During the mid-1990’s he taught courses in watercolor technique and collaborated with two private arts schools in Florence, Studio Cecil and The Florence Academy of Art. Reed’s work has received several awards and honorable mentions and has been shown in both solo and collective exhibitions in Australia, Italy, Switzerland, and throughout the United States.

Endangered by MaryAnn H. Goodhue
MaryAnn H. Goodhue’s fascination with color, pattern, and repetition are immediately evident in her work. Her bold palette, a bit irreverent and humorous, is both challenged and inspired by the Fauvism movement of the early 20th century, and influenced by painters like Paul Cézanne, Paul Gauguin, and Maurice de Vlaminck.  Though her body of work boasts a very diverse use of materials, subjects, and inspiration, the artist has chosen to display one particular series of paintings for her one month presentation at the City Gallery. Endangered features a collection of oil paintings inspired by the devastation to the native bird population in Goodhue’s home state of Alabama caused by the 2010 Gulf Oil Spill. More than 300 species of birds live or pass through the Gulf Coast each year, including some rare and endangered species, making it one of the most important bird habitats in the world. Thousands of birds were immediately impacted by the estimated 170 million gallons of oil that flooded into the Gulf, with thousands more expected to suffer from long-term impacts such as an unbalanced food web. “As I photograph, sketch, and bring to life the struggles of these birds, I find myself enthralled with the plight of these endangered, graceful creatures,” Goodhue says. “Though the oil is no longer visible, their battle for recovery continues.”

MaryAnn H. Goodhue was born in New Jersey and currently lives and works in Montgomery, Alabama.  She received her Bachelor of Arts in Sculpture from Augusta State University in Georgia in 1988 and her Bachelor of Science in Art Education from the University of Nebraska at Omaha in 1993. She taught students of all ages as an art educator for over twenty-five years, exchanging work in the classroom for full-time work in the studio in 2010. Her paintings and sculptures have been included in numerous juried and invitational exhibitions throughout the United States. Presently her work is represented by the SAC Gallery in Montgomery, Alabama.

The North Charleston City Gallery is situated in the common areas of the Charleston Area Convention Center, located at 5001 Coliseum Drive in North Charleston. Parking and admission are free during regular Convention Center operating hours, 9:00am – 5:00pm daily.  The gallery is staffed on Thursday, Friday, and Saturday only.   Inquiries regarding the artists or purchase information may be directed to the North Charleston Cultural Arts Department at (843) 740-5854. For information on additional exhibits, programs, and events, visit the Cultural Arts section of the City’s website at http://bit.ly/culturalarts.