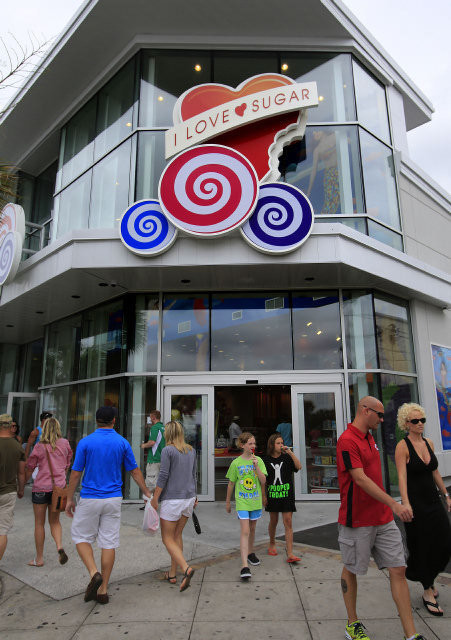 National candy store chain It'Sugar, with a location at Broadway at the Beach, had sued Myrtle Beach based I Love Sugar, on Ocean Blvd (pictured) claiming trademark infringement. THE SUN NEWS — File photo

On Tuesday a federal judge denied a national candy store's request request for a temporary injunction that would have effectively would have shut down its cross-town competition. The ruling states that I Love Sugar shop which is located on Ocean Boulevard did not violate any trademarked design elements that are owned by it'Sugar which is located at Broadway at the Beach.

On Tuesday Judge Harwell said that  It’Sugar has failed to shoe that those and other design elements were inherently distinctive to its stores. The judge stated in his ruling that “other hip and high-end candy stores . . . had been targeting consumers” with  similar design elements even before I Love Sugar opened its first store in 2006.

It’Sugar “fails to show that its trade dress is more than merely a refinement of a previous design that was emerging nationally in the early 2000s,” Harwell stated.

While there are similarities in the design of the two stores, Harwell said there was no evidence that I Love Sugar owner David Oaknin intended to deceive consumers into thinking that his store was affiliated with the national chain.

Head on over to The Sun News to read more.