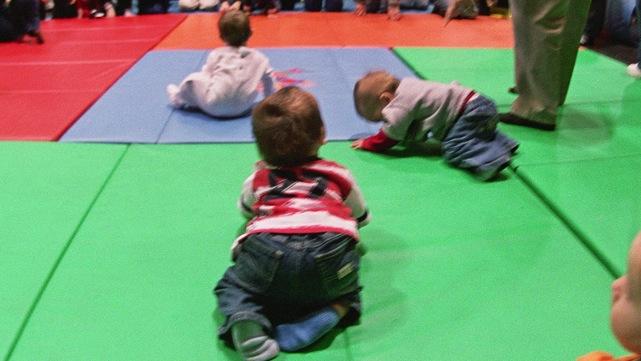 VisitMyrtleBeach.com, along with the Big South Conference and Coastal Carolina University, are happy to announce a fun halftime promotion sure to interest new parents—the Big South Baby Race to Myrtle Beach. Officials announced today that the halftime promotion will pit babies 18 months and under against one another in what is sure to be an adorable crawl to the finish line on the court.

The baby racing distance will be approximately 15 yards in length near center court and in front of the cheering crowd during halftime of the men’s championship game at around 12 p.m. on March 10. All babies entered in the contest will take home five packages of diapers while the winning baby will be awarded a $500 college savings bond and a Myrtle Beach prize package valued at $500. The contest is free and easy to enter online at VisitMyrtleBeach.com/BabyRace, but space is limited.

“The VisitMyrtleBeach.com Big South Baby Race to Myrtle Beach a fun promotion that the crowd is sure to love. Not only will the winning baby leave with a nice start on their college savings, but all babies who participate will take home diapers. We’re excited to see which babies enter and hope to have a good mix of Myrtle Beach area locals as well as Big South Conference Championship out-of-town attendees,” said Nora Battle, spokesperson for VisitMyrtleBeach.com.

Participants must be 18 months old or younger and only able to crawl. Entrants will also have to have a ticket to the men’s championship game on March 10 to get inside the HTC Student Recreation and Convocation Center and on the court to participate, but a limited free amount of tickets will be supplied by VisitMyrtleBeach.com for those first moms and dads to register their little ones.

Parents will even have the opportunity to see their baby on the Jumbotron during the game by choosing to submit a photo when they enter. More information, as well as the entry form, can be found at VisitMyrtleBeach.com/BabyRace. A limited number of entries will be accepted on a first come, first serve basis, and contestants will be contacted and provided information once they’re entered. The deadline to enter is March 7.