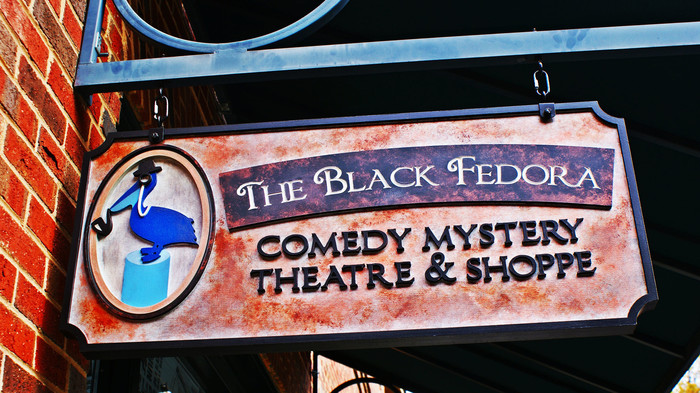 We hung out our shingle on Church Street, just off Market Street downtown.

On August 2, 2012, few passersby likely took notice when yet another mom-and-pop business

that a few hours inside a cozy, intimate theatre at 164 Church Street could make a world of

was the first of five shows to run for a total of 245 theatrical performances over the last year.

with more than 7,200 guests from fifty states and five continents, hundreds taking up roles

themselves at the Theatre Where the Audience is the Star; and so many followed up their visit

Fedora ranked in the top 21 attractions in Charleston according to TripAdvisor.com.

And then there’s the team of 30- plus actors who have graced our stage and our hearts. Our six

exclaimed, “You know, for a teeny-tiny actors’ room, there sure are a lot of laughs coming out of

there!”  Yes, in fact, for one little theatre that doesn’t take itself seriously at all, there have been a

whole lot of laughs coming out of there all year long.

Head to the source at charlestonmysteries.com