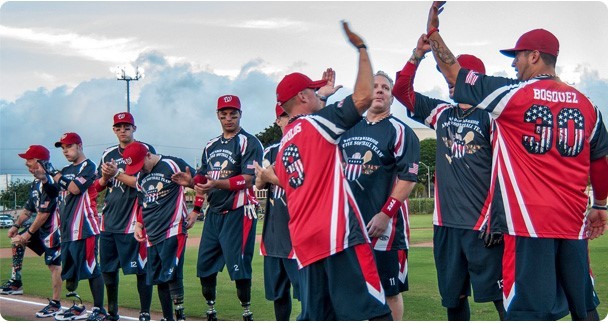 11:41 am on Thursday February 26, 2015 | Posted by The Citadel
Wounded Warrior Amputee Softball Team to play “Battle of Charleston Harbor”

For the first time the national Wounded Warrior Amputee Softball Team (WWAST) will visit Charleston for a special exhibition game that is open to all with no ticket purchase required. The WWAST, known as “America’s Favorite Team,” will play The Citadel 1990 college world series “Team of Destiny,” the first team in The Citadel’s history to make it to the college world series by beating one of the top teams in the country at the time. The game is called the Battle of Charleston Harbor and will take place at 11 a.m. on March 21 at The Joe Riley Stadium which is located at 360 Fishburne St. in Charleston.

The mission of the WWAST is to raise awareness, through exhibition and celebrity softball games, of the sacrifices and resilience of America’s military service people, and to highlight their ability to rise above any challenge. Their goal is to show other amputees, along with the general population, that these athletes, through extensive rehabilitation and training, are able to express their desires and perform in the sport they love.

“The big thing for me is that I played sports growing up, and when you lose a body part, you’re wondering if you’re ever going to be able to play again,” said WWAST shortstop Matt Kinsey. He lost his foot when he stepped on a land mine while serving with the 82nd Airborne in Afghanistan. But Kinsey wouldn’t let that slow him down and has played with the team for several years. “You make the best out of a bad situation,” said Kinsey.

The first pitch of the game will be thrown by Gen. Claudius E. "Bud" Watts, former president of The Citadel from 1989-96. Following the epic Battle of Charleston Harbor, there will be a three-inning celebrity bonus game and then The Citadel Bulldogs baseball team will take the field against University of Maryland, Baltimore County at 2 p.m.

Channing Proctor, a member of The Citadel’s 1990 college world series team said, "It'll be a special honor and a life-long memory to both host and play the WWAST in the Battle of Charleston. We are grateful to The Citadel family from President Lt. Gen. Rosa, to baseball Coach Fred Jordan, and everyone in between, for bringing this extraordinary event to fruition."

The WWAST team is comprised of young, competitive, athletic veterans and active duty soldiers who have lost limbs post-9/11, while serving in the military. It includes individuals with a variety of amputations of the arm, above knee, below knee, bilateral below knee, and foot. Some athletes are still in the service and others are attending college with the assistance of the Post-9/11 GI Bill. Other players on the team have a variety of careers. The WWAST has played in games around the country since 2011. To see a roster of the team click here.

Admission to the Battle of Charleston Harbor is free. There will be reserved seating for veterans and their families. The gates will open at 9:30 a.m. All donations and proceeds will go towards the WWAST, Limbs Without Limits, The Charleston Miracle League and Carolina Children’s Charity.