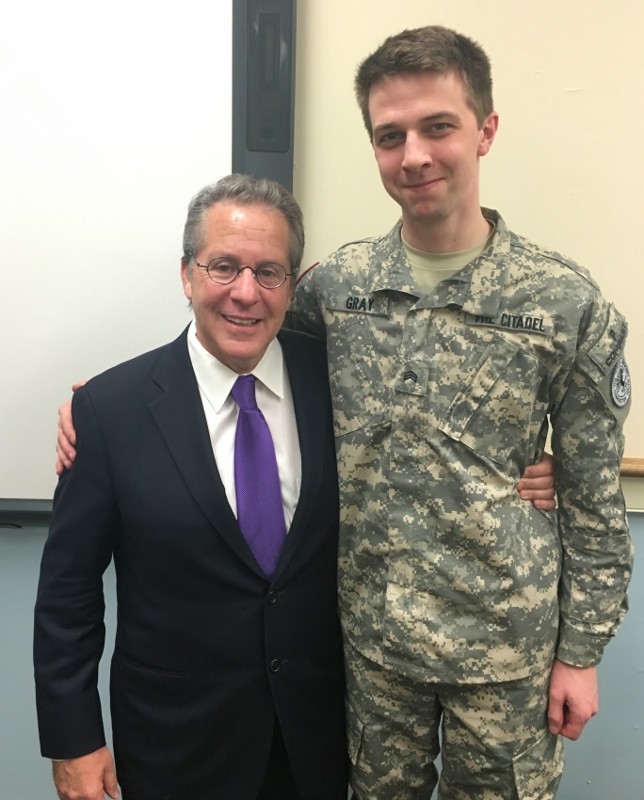 I assumed it would be an uneventful Thursday afternoon ─ finish my last class, macroeconomics with the fantastic Dr. Sykes Wilford, and then move on with my day. I was quite wrong in my assumption. Instead, former Charleston Mayor Joe Riley (who is an esteemed member of our faculty now and a Citadel alumnus), came into the room and introduced Gene Sperling, the former National Economic Council Director for Presidents Clinton and Obama. An internationally respected mayor dropping by my classroom along with his friend who used to have an office right above the Oval Office? This was certainly an “only at The Citadel” moment.

I’ve been incredibly lucky during my time here to witness some very special speeches, from Medal of Honor winners to senators to mayors. This, however, was a different story. We wouldn’t be together as the entire South Carolina Corps of Cadets listening to a speech. Instead, the classroom held a mix of about 25 students and a few very powerful people.

Mr. Sperling spent about an hour speaking to us. He told us about his beginnings with the Michael Dukakis presidential campaign, working for Governor Mario Cuomo and his involvement with President Clinton’s first campaign for president. He spoke more specifically about the restructuring of how economic policies were created, once President Clinton reached the White House, and the formation of the National Economic Council (NEC). Mr. Sperling served as deputy director and director of the NEC during his time under President Clinton.

Based on what I heard, life as a high-ranking director in the White House doesn’t seem so bad. Mr. Sperling later went on to advise Senator Hillary Clinton during her 2008 bid for the presidency. Following that election, President Obama brought Mr. Sperling back to the White House to be reinstated as the Director of the National Economic Council, and left the job in 2014.

After his speech, Mr. Sperling was very open to hearing and answering questions. The questions focused on economic policy, some being very broad, some quite specific. Topics ranged from the minimum wage to healthcare premiums and student loans. I learned a great deal from that part of the presentation, and even though I was disappointed he couldn’t offer a legitimate way for me to get rid of all my student loan debt, I was still thankful for the experience. We also found out his wife has written for television shows The West Wing and Narcos, which are incredible shows. It was unfortunate that she couldn’t be there because I had many questions for her as well.

At the end of class, Mr. Sperling was kind enough to offer his email to any of us who had more to ask, as well as take pictures with many of us. It was a great way to wrap up an incredible afternoon. It was proof that at The Citadel, anything can happen. During lunch I figured it would be a normal day but by 5 p.m., I had met Mayor Riley and the former Director of the National Economic Council. Quite an amazing change, I must say.

I hope I was able to give you some insight into a wonderful class and event. For now, I better finish up and get to bed. I mean hey, it’s best to be prepared, who knows what tomorrow could bring?