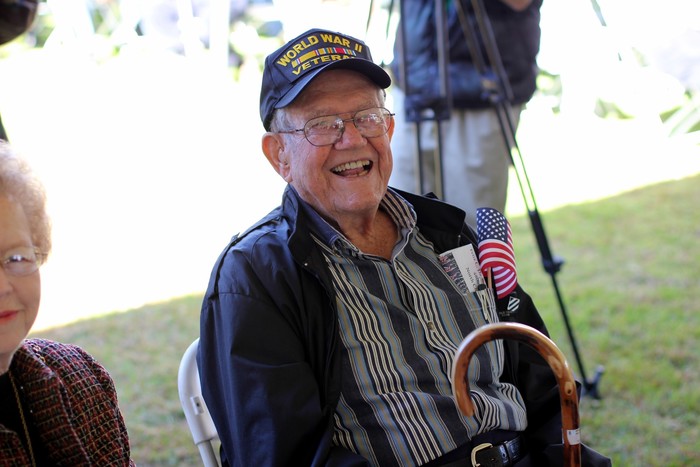 WWII veteran with a constant smile

8:52 am on Wednesday October 16, 2013 | Posted by northcharleston
Veterans Day 2013 in North Charleston, a Tribute to our Veterans

The City of North Charleston will host its annual Veterans Day tribute on Monday, November 11, 2013 from 10:30 am – 1:00 pm at Park Circle. We ask veterans and the public to join Mayor R. Keith Summey and City Council in this special ceremony.  Last year, over 500 veterans in attendance were honored.

All veterans in attendance will be recognized and will receive a specially designed commemorative coin. To receive a coin, veterans are urged to RSVP no later than November 4 to (843) 740-5801, (843) 745-1028 or via email at cdambaugh@northcharleston.org.

Prior to the ceremony, from 9:30 am – 10:30 am, a story swap will be held in the Felix Davis Community Center.  Veterans will have an open opportunity to share memories and stories about their service with fellow veterans.  The story swap is open to the public.  Veterans wishing to speak should RSVP to (843) 740-5850.

Once again, lunch for all of the event attendees will be provided immediately following the ceremony.

Colonel Myron C. Harrington, Jr. USMC (Retired) will be the event’s keynote speaker.  Col. Harrington, a native of Augusta, Georgia, graduated from The Citadel in 1960 and was commissioned in the USMC in 1961.  He would go on to serve his country in the Vietnam War.

The Navy Cross for extraordinary heroism was awarded to Col. Harrington for his actions during the Vietnam War on February 23, 1968 at the Battle of Huế.  During the battle, he commanded a USMC force attacking a well-fortified North Vietnamese position along a portion of the wall surrounding the Huế Citadel.  Under heavy fire and with disregard of his own safety, Col. Harrington maneuvered the Marines under his leadership to route the North Vietnamese soldiers from the encampment.

An hour long interview filmed on December 8, 1981 with Col. Harrington from the WGBH Media Library and Archives can be found here: http://openvault.wgbh.org/catalog/vietnam-de0a9d-interview-with-myron-harrington-1981.  The interview is his personal account of the Battle of Huế.

Col. Harrington earned a Master’s Degree in Public Administration from Shippensburg State College in Pennsylvania in 1980.  After retiring from the USMC in 1991, he joined the staff of Trident Academy in Mount Pleasant, where he later became the Headmaster.  He now sits on the Board of Visitors at The Citadel.

Head to the source at cityofnorthcharleston.blogspot.com
Advertisement