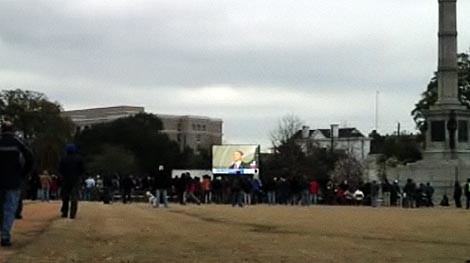 Update January 21: There's oodles and oodles of local coverage out there about the event, so here's your best bets: The video above, and The Post and Courier's coverage of events around town.

First reporting: Hundreds turned out for the City of Charleston's free viewing of the inauguration of Barack Obama on Tuesday -- and we were there, capturing the video above.

But, set in the shadow of the John C. Calhoun monument, the scene carried a powerful, largely unnoticed message about overcoming: Calhoun was vice president from 1825 to 1832 and a defender of slavery, calling it a "positive good."

I found the speech to be particularly moving and on-point. It was a speech captured the attention of locals and the nation alike.

Read more stories on this subject in our inauguration topic page. The Charleston Regional Business Journal shares a collection of photos from the event, Chrys Rynearson also shares a splendid set of imagery, and The Post and Courier also shares a quick video of the event.

But the local story goes beyond that Marion Square event. As part of that, local bloggers were all aflutter over the inauguration posting remarks good and critical.

Local blog Venti Chocolate Mocha says:
I don’t recall this much hype when George W. Bush was sworn in as president. Some of it is Obama’s status as the first black president in a country that continues to face racial divides and tensions. Some of it is the country’s deep desire for a president who will lead us in the right direction.

Charleston's Martin Luther King, Jr. parade was also particularly vibrant this year, no doubt as it came just one day before the country's inauguration of its first black president.

And I'm sure there's a lot more that happened in our community today. I'll add it as I hear of it -- and feel free to share links the comments below.

Update January 21: The Post and Courier reports about the Charleston Inaugural Celebration Affair in North Charleston, saying in part:

Feaster was one of the few hundred people who turned out for the Charleston Inaugural Celebration Affair, a community bash that started out as the Scott family's "kitchen table" notion to hold an inaugural party and invite a few friends.

It was singular among the post-event events — free, open and casual, under an entry arch of red, white and blue balloons in the Alfred Williams Community Center.

Go read it. They've also expanded their Marion Square write-up and added a some nice photos from around town.

They also have a great story that talks about events from around town.

Update January 21, 2 p.m.: The Charleston Regional Business Journal has added their own video of the event.

Update January 22: And they keep coming. The Charleston City Paper has a short write-up from the College of Charleston's gathering.