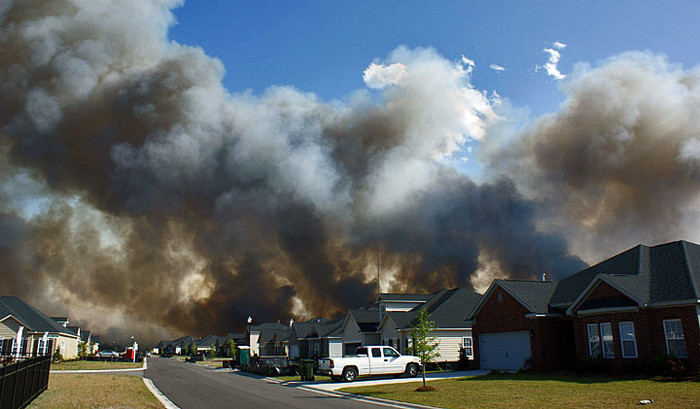 Update April 26, 5 p.m.: Though the fire remains very near many subdivisions, winds have calmed and firefighters are beginning to bring the blaze under control.

Officials are beginning the extensive "mop-up" phase along the western side of the fire and caution people to avoid from any tourism or recreational activity in the area. There is still activity in the burned zone, particularly as fires may still flair up.

Also firefighters are encountering much wildlife on the move -- likely they are fleeing the burned area.

And be sure to check out this excellent visual explanation of the fire.

The fire in Myrtle Beach is beginning to calm down and become contained, thanks largely to wind speeds dropping drastically.

Read more stories on this subject in our Myrtle Beach fire topic page.Still, officials will stay on watch. Even if the fire is contained today, conditions remain dry in the area and ripe for another fire to start.

As of Saturday night the fire was some 85% contained, and had burned approximately 20,000 acres, destroyed 76 homes, heavily damaged 7 homes, and caused minor damage to 89 homes. In all the damage has so far been estimated near $16 million.

As before, the homepage of The Sun News is the best spot to get connected with the many facets of the story. Also be sure to glance at the timeline, and new photo gallery.

Here is the map of the burning and burned area as of 8:30 p.m. last night -- click to enlarge.