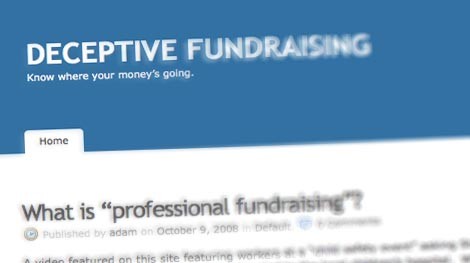 There are many many perfectly legit groups selling a nearly endless array of key chains, calenders, mints, and certificates to help out a good cause, but where there is money there's always a draw for legal, but perhaps immoral money making.

One local man was incensed when he saw a coworker be misled, in an e-mail that local said:
Today, this organization was setup in front of Starbucks in the Belle Hall shopping center. From inside [Starbucks], I saw my coworker making a "donation" to this organization. They told her that for $20 (plus tax), she would be buying an underprivileged child a calendar that helps teach some sort of child safety/kidnapping prevention. For each one she purchased, they would "match" with another calendar. She bought one and all they provided to her in return was a receipt that they claimed was tax deductible.

When she came in after making the donation, I told her that I didn't think most of the money makes it to a charity. Infuriated, she went outside and had a conversation similar to this with the organization:

The situation could certainly have been worse, the marketers could have simply lied and given nothing to the charities.

When you feel like doing something charitable, be sure to ask about how much of the purchase cost actually goes to the cause. If you're not absolutely comfortable with the setup, cut out the middle man and give your money straight to the group you want to help.

If you think something may be amiss, head over to Deceptive Fundraising for lots of info on how these groups work, what the law says, and what you can do about it.