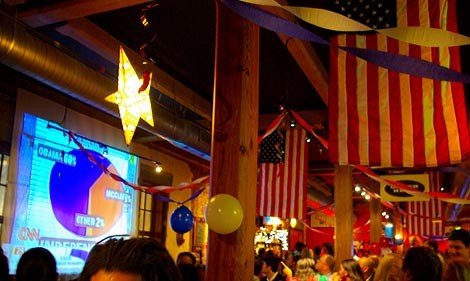 Update November 8: Berkeley and Dorchester counties have certified the results of their elections, but Charleston has not yet.

Berkeley and Dorchester reported that the results of the races did not change. Charleston County had experienced several problems, resulting in vote tallying delays.

Update November 6, 12 p.m.: The Associated Press has called North Carolina for Obama, making it the first time the state has voted Democrat since 1976. Currently a margin of 13,746 votes separates the two candidates; that 0.3%.

The New York Times has a good in-depth graphic of national and state results.

Update November 5, 2:40 p.m.: The results are going to trickle in through the day and we'll update you on the big headlines. But you can check out local races here:

Also, forgot to mention that the measure allowing the state to set the age of consent passes, and measures to invest pension plans in the stock market failed.

Update November 5, 9:30 a.m.: I know everyone wants to know who won locally, but there seems to have been some problem in Charleston County yesterday. They're one of only five-or-so counties in S.C. missing some results on the state Web site. They have by far the most missing. I'm digging.

Here's the raw data from Charleston County with 97% reporting. Just remember some races (like Ketner-Brown) are multi-county. Go get it.

Here's what we do know:
U.S. House member Clyburn seems to have thumped Nancy Harrelson.
Ketner is still in it against Brown, but she'll have to do verrry well in the few remaining counties.
Charleston County went blue and voted for Obama.
The Scarborough-Hutto race on James Island is close. 8,159 for Scarborough (R) and 8,422 for Hutto (D) for State House of Representatives Dist 115.
Stavrinakis (D) seems to have defeated Cannon (R) for State House of Representatives Dist 119. Results.
The Wooten and Middleton race is tight for Coroner. 66,775 for incumbent Wooten (R) and 65,439 for Middleton (D).

And some races we know outside of Charleston County
Mike Rose has beat Bill Collins in Summerville. The Post and Courier's take.
Lindsey Graham is headed back to the U.S. Senate.
Berkeley County went for a tax to improve roads and to keep their form of county government.

Original post: Watch this page for continually updated election results for South Carolina as they come.

7:26 p.m.: The U.S. Senate race in the Upstate is being called for Lindsey Graham by numerous outlets ... given the race thus far this is hardly shocking.
7:58 p.m.: CNN calls S.C. for McCain. No shocker there.
9:30 p.m.: We're still waiting on Charleston County to report. More than two-and-a-half hours after the official close of the polls.
9:45 p.m.: The race has been called for Clyburn.
10:40 p.m.: Speculation that S.C. could have a record turnout.
11 p.m.: Brown has defeated Ketner.
11 p.m.: Well, there you have it Obama will be the next president ... and we're still waiting on Charleston County to report. We'll bring you the round up of the results in the morning. If you can't wait, just use the links below to get the results.

Get loads more election data on our election page.