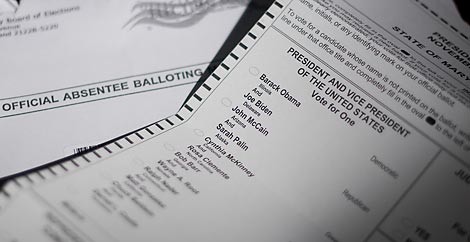 Update: Also check out our newer story on how long the lines have gotten to vote absentee.

We knew it was coming, but the 2008 election year has officially smashed 2004's record number of absentee ballots cast in South Carolina.

You, too, can hope to avoid long lines by voting absentee. Do so by mail up to four days before the election, or do it in person at county voter registration offices until 5 p.m. the day before the election. Get lots more details on how at the S.C. Election Commission site.

In many states mainly Democrats have been showing up to vote early.

Though, I still think speculation that Obama could carry South Carolina is a bit ludicrous. Even in McCain's embattled state, he still has 11 and 20 point leads in the Palmetto State. And Palin is still having a generally good effect on McCain's chances in South Carolina.

In related news: The State has endorsed McCain. But, I am disapointed that the paper failed to say why McCain is the right choice for South Carolina and chose mainly to speak why he's good for the U.S. as a whole.

Certainly we have to vote for the good of the country, but there are plenty of smarter people thinking about why he's the right (or wrong) choice for U.S.A. -- but few analysts are thinking about what the candidates offer for South Carolina. The State could have been that.

Unless I missed it, we're still waiting on The Post and Courier to make a pick. -- Hopefully they'll have something to say on how the candidates could help or hurt South Carolina.