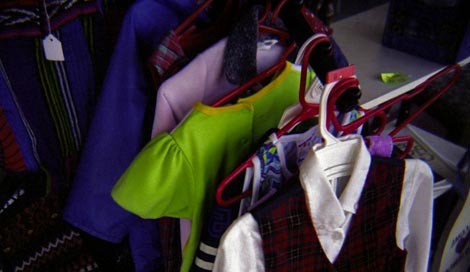 6:04 am on Monday January 26, 2009 | Posted by Ken Hawkins
Thrift stores get a little hope in face of crippling lead law (updated)

Image by Flickr user contrapositively Image by 20090108-clothing.jpg You see clothes, the law sees death on a hanger.

Update January 26: The Post and Courier has done their own reporting on the story, and it seems that there are still some headaches with the new law.

Their reporting, in part:
The clarification said resale shops are not required to conduct lead testing, an expense that can run into thousands of dollars, but resellers cannot sell children's products that exceed the new lead limit.

Numerous local businesses are still concerned about the rule's implication.

Until already lead-tested products move down the supply chain, I could see second-hand clothing sellers getting a pass if no ill is intended in their practices -- but that's not a spot I'd like to be in as a business owner.

First reporting: The good news: A new, national law that was passed to prevent lead poisoning in children goes into February 10.

And the bad: The problem is the scope of the law, critics say it was passed too hastily and is too broad.

The law requires that all products (including clothes) sold to children of fewer than 12 years be tested for lead and a toxic plastic additive, phthalates. And it's not cheap to do that testing.

The Los Angeles Times has some excellent reporting on the issue, in part:
Many retailers and thrift stores appear to be unaware that the law is changing. Of half a dozen Southern California children's thrift stores contacted by The Times, only one had heard of the law. Organizations such as Goodwill say they're still investigating how the law will affect them because there is so much confusion about what will be banned.

Cynthia Broockman, who owns two consignment stores and a thrift shop in Virginia, recently stopped accepting children's products for resale. That raised the ire of a man who was trying to sell his son's castoffs there and had not heard of the new rules.

There is some hope that The Consumer Product Safety Commission -- who is charged with interpreting the new law -- can make some interpretations. But no solution is yet in the works.

If you want to do something about it, an online petition dubbed "Save Kid's Clothing Resale, Consignment & Thrift Stores from Closing!" has been formed. (Thanks to local Twitterer Lyn Mettler for pointing that out).

Part of that petition says:
The broad scope of the complicated law, and it’s interpretation by CPSC has effectively made it illegal for parents to resell their children’s clothing and gear at a garage sale, on eBay, Craig’s List, through consignment stores or annual children’s consignment sales. If donated to a nonprofit like Goodwill or Salvation Army, those organizations can’t legally resell it, as of February 10th. That’s right. Hand-me-down clothing for kid’s age 12 and under will be illegal to resell. It will be a banned hazardous product. The fines of $100,000, potential jail time and label as a felon for violations are stiff.

Without effective venues for parents to pass along their kid’s gently used items where does Congress think this massive amount of consumer product is going to quickly end up? Landfills here it comes!

On the upside as newer, already tested clothing makes it way to thrift stores they won't be responsible for testing the item -- if there is a way of knowing that the item has been tested.

On Tuesday, thrift stores received some reprieve thanks to a decision by the Consumer Product Safety Commission. The (Pennsylvania) Times Leader reports, in part:
On Tuesday, the commission tentatively exempted the following: items with lead parts that a child cannot access; clothing, toys and other goods made of natural materials such as cotton, silk, wool and wood; and electronics that are impossible to make without lead.

That still leaves clothes made from polyester or other non-cotton materials and toys made from plastic needing to be tested or thrown out. It also means that only clothes without embellishments – zippers, snaps, buttons, tags – qualify.

But it seems improbable that a solution will be found before the law goes into effect on February. Which would mean, at best, a temporary pause on the sale of many items.

So, there you have it. For background on the problem go read the L.A. Times story, and for what you can do go check out the petition, and for the hope in the mix check out the Leader's story.