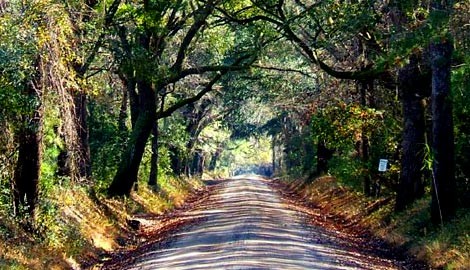 Image by Flickr user jenzaImage by 20090220-botany.jpg An image of some of the plantation's tropic-like trails. The area has been used in a number of movies.

View a slideshow of images from Botany Bay PlantationIn short, though there are a few interesting buildings, come for the nature not the architecture. Even the road out to the plantation is a photographic star.

The land is also up for use as hunting grounds. Kayaks and other small craft can be put in the water at the the Sea Cloud landing on Ocella Creek.The plantation's lands have also been used in several major films: Ace Venura: When Nature Calls used the plantation for the jungle scenes as well as the the African village scenes. The Patriot also used the area for its beach slave camp shot.

The Post and Courier does a good in-depth look at the land, its past and its future role:
Wild turkeys and deer haunt the woods. Lunker red drum are in the waters. Gators slide across the causeways between marshes. Pelicans glide in swarms over the beach to the nearby Deveaux Bank rookery. Oyster and hard clam shells on the ocean beach tell the story that the beach was once a hammock island in the estuary. In season, loggerhead turtles nest in the sands.

The area is open one hour before sunrise to one hour after sunset. Visitors should sign in and out at the main entrance.

The former-farm was left to the people of South Carolina by Margaret Pepper.