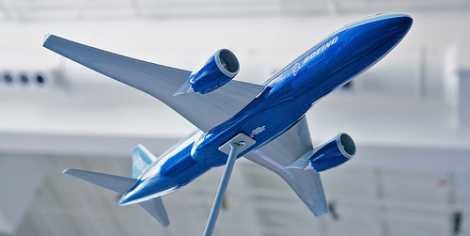 Image by Flickr user Marcin WicharyImage by 20080813boeing.jpg Right now, you'd have an easier time getting this model Dreamliner to fly than the real Boeing 787. And now Vought Industries' North Charleston plant is feeling the delays.

Vought Aircraft Industries, which announced in its second quarter earnings report that it was "rebalancing" its operations, has halted work on the rear part of the Boeing 787 Dreamliner fuselage for at least several months, according to officials. The work was being done at the company's North Charleston facility

Vought continues to rebalance all aspects of its operations to address the lower number of near-term deliveries needed to support Boeing’s refined schedule. In addition, in the second quarter of 2008 Vought completed the sale of its interest in the Global Aeronautica joint venture to Boeing. ”While we are currently slowing the pace of our operations, we continue to examine and develop a variety of plans that will enable us to efficiently ramp up to the production rates requested by our customer, when that is required,” said 787 Division Vice President Joy Romero.
See more local stories about the 787 Dreamliner on our topic page.

The Post and Courier followed up on that tantalizing remark, and found that work on the fuselage has been halted, though workers are finishing up the aft section of one of the Dreamliners. Beyond that, there aren't any immediate plans for further work on the long-delayed Boeing Dreamliner project, most recently hampered by an incident at the Global Aeronautica facility in North Charleston.

"We've slowed down a bunch. ... That's just the nature of things. It's going to be that way for a few more months," (Vought CEO Elmer) Doty said.

The production cut has not led to any job losses locally, said Vought spokeswoman Lynne Warne.

The company does expect fuselage orders to continue, and production work to increase, in 2009, however, so hopefully the down period won't have too rough of an effect around here. Luckily, as the rest of the 2Q earnings report discusses, the company seems to be doing pretty well for itself, regardless of the Boeing situation. (Vought's sale of their stake in Global Aeronautica to Boeing definitely helped with that ...)

Vought has the capacity to "easily go to a levelized production rate of two per month", says Doty, but he foresees more of an upward slope. Most of the projections he has seen "suggest a more gradual step-up through the next 16 months or so".

Update August 3:21 p.m.: The Charleston Regional Business Journal has chimed in, noting that the company's net income increased some 204%. They also report that CEO Elmer Doty said the company is raising capital so it can scale production when boeing is ready. They continue on why.