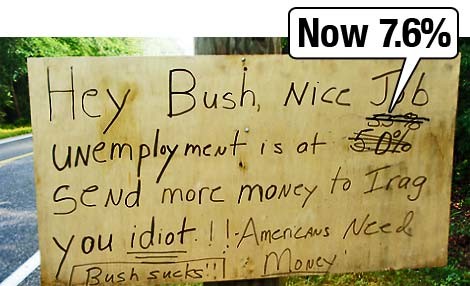 Image by Flickr user phoebeoftheseaImage by 20080920jobs.jpg Folks were none to happy about a 5% jobless rate, I suspect a 7.6% wouldn't thrill them either.

South Carolina's jobless rate is the biggest it's been since May of 1993.

New numbers for the state's unemployment rate in August 2008 showed an average 0.6% jump from July, and 1.8% jump from the year prior. (Go check out the numbers for yourself)

And the organization that pays out jobless benefits, the state Unemployment Insurance trust fund, is becoming increasingly worried as its money reserves are at an "extremely low" level, while payout is topping $10 million a weak.

But don't worry about not getting a check, as the federal government will help out the system if it runs empty, but it's never good to take on more debt as you lose more work.

The Post and Courier did some good reporting and got some analysis of the situation, in part:
As the national economic slowdown took hold, South Carolina's economy initially held strong. The state's manufacturing base and the Port of Charleston boomed as a weak U.S. dollar caused a jump in foreign exports.

But the dollar has gained strength lately, while two major markets for United States-made goods — the European Union and Japan — posted negative GDP growth rates, possibly signaling a recession for both.

They've got lots to offer, so go read it.