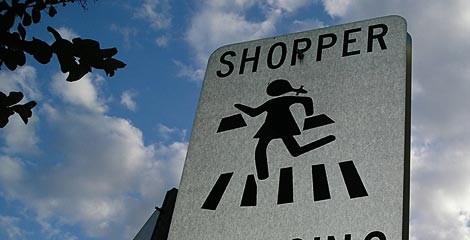 8:49 am on Wednesday December 24, 2008 | Posted by Ken Hawkins
Local business picking up after getting off to a dismal start

Holiday shopping seems to be surging at last, after going through a dismal lull the last several weeks.

Jon Cagle, store manager of Lucky Brand Jeans at Tanger Outlet Mall, as quote by The Post and Courier:
Surprisingly in the last week and a half business picked up again. There really isn't a reason. Our promotions haven't really changed.

Though predicted sales are still down, the packed shopping lots and increased sales are offering hope to local retailers.

Andy Paras does a good job of summing things up over at The Post and Courier, go read his piece.

If your wallet's feeling extra pinched, you might just be able to get the store to haggle with you. Here are the details, just don't go and make yourself look like a jerk.

And, don't forget that after this holiday season a number of stores could shut down, so if there's a business you really like, make sure to support them over a big-box discounter who can better weather the storm. This Associated Press piece titled "Last-minute shoppers won't save Christmas" offers a sad evidence of bad times for smaller shops:
Many merchants who are on the edge of survival are already tallying up just how dismal their sales were in a season expected to be the worst in decades. ...

In a desperate attempt to pull in shoppers, merchants deeply discounted holiday goods as soon as they hit stores starting in November. But except for a shopping binge on the day after Thanksgiving, Americans have remained tight-fisted. They've slashed their holiday spending from a year ago, and when they do buy, they are looking for small-ticket, more practical gifts.