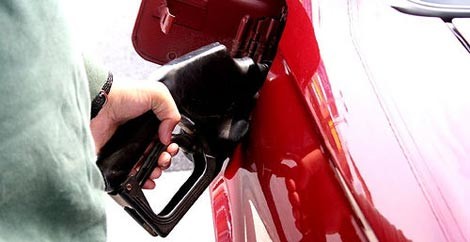 Update September 13: Reports are coming in that the rush on pumps has lead to some gas stations running out.

NBC News 2 thought they'd take a little time to try and spot where you can get the lowest price. The lowest they saw in the are was $3.69. Go read it.

Original post: Ike's approach on the Gulf Coast has shuttered most oil drilling and refining in the region, touching off a wildfire of gas shortage and price hike speculation. Here's a tip: Fears are largely unfounded and you can save yourself a bundle by waiting a few days to fill up.

It all started innocently enough: Gas suppliers warned gas stations that Ike could interrupt fuel delivery for a couple of days, and to prevent shortages gas stations asked consumers to pump only what they needed, just in case a problem came.

And the problem did come, only the problem was the public's fear of a possible problem, so consumers rushed to the pumps while fears of Ike grew, driving down possible supply and shooting up demand and prices at the pump.

By noon our Attorney General McMaster had to worn of criminal penalties against price gouging at the pump. Three hours later a report surfaced of $4.59 gas.

But The State relayed this solid advice from AAA:
AAA Carolinas discouraged motorists from topping off their gas tanks. “That will worsen the situation before anyone knows what the damage will be,” AAA Carolinas president David Parsons said. “We encourage people not to panic, drive conservatively and don’t take unnecessary trips until the damage assessment is completed early next week.”

It's advice I'll be heading, and just remember when you hear folks talking about how 25% of the nations refining ability is at risk, that 15% of it was closed for Gustav to little effect on our pump price.

So, save yourself a bundle and stay away from the pump today.