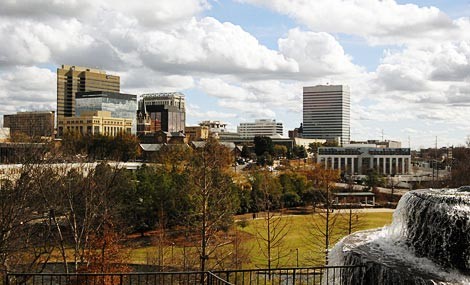 It's not the attention you want, but The New York Times has penned a lengthy piece on how our capital, Columbia, is "an ideal listening post" for what's going on in the country as a whole.

In part:
No speculative real estate bubble can explain what is happening in this metropolitan area of roughly 700,000 people. Neither the brick Georgian homes in the city’s core nor the ranch-style houses on the suburban fringes rose or fell much in value. The financial wizards of Wall Street seem far from the palmetto-dotted campus of the University of South Carolina and the domed state capitol downtown.

Yet as the toll continues to mount from an era of financial recklessness — as banks cut credit from households and businesses, reinforcing austerity — the damage has spread here, choking economic activity at places ranging from shopping malls to factories.

“This was not of our doing,” said Doug Woodward, an economist at the University of South Carolina. “We just got swept up in the crisis of confidence.”

It's a very good piece, well worth reading, so go read it.