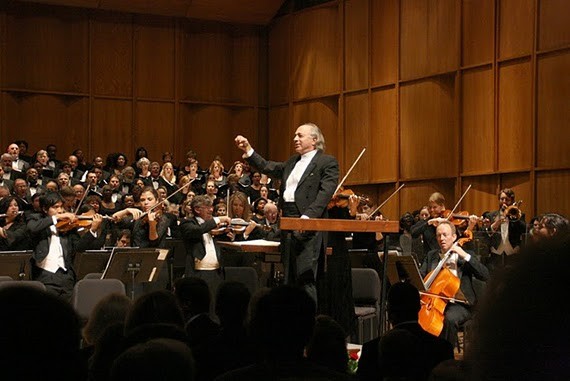 Charleston Symphony Orchestra musicians have rejected the terms of a proposed agreement meant to keep the symphony in business for the 2010-11 season.

The drastic salary cut and the number of scheduled performances in the agreement was nixed by CSO musicians during a balloted vote this week. It's looking as though the 75th anniversary season won't be happening after all.

Read all about it in The Post and Courier.

The Charleston Regional Business Journal reports that Charleston Symphony Orchestra musicians are in the process of filing a complaint with the National Labor Relations Board following the CSO board of directors' decision to suspend the program's operations.

Musicians in the CSO were signed into a five-year collective bargaining agreement that runs through May of 2012, and the board's decision is in violation of its labor agreement.

It's been well known for some time that the Charleston Symphony Orchestra has been struggling, still after running for 75 years the group will take its first unscheduled pause.

An announcement of the group's Web site state that it would rework "its current organization and operating model in order to better position itself to provide Charleston with high quality performances in a financially sustainable manner."

The Post and Courier has a nice overview of the situation; read it here. I've also pasted in the release below. It's a lot of fluff but also tells you how to get refunds.

CHARLESTON, SC (March 28,2010) – The Charleston Symphony Orchestra (CSO) will undertake a restructuring of its current organization and operating model in order to better position itself to provide Charleston and its surrounding communities with high quality performances in a financially sustainable manner.

The CSO Board voted last Thursday, to temporarily suspend all operations as of midnight March 28, 2010, and cancel all remaining performances for the 2009-2010 season. This action was taken as the result of a critical cash flow situation.

“Currently, the CSO does not have the operating cash flow to continue to pay its musicians or staff member’s salaries and the organization’s operating expenses,” said CSO President Ted Legasey, “This was a very difficult decision for the Board and we are committed to work diligently to find a solution that enables the organization to continue to serve the Charleston community.”

“Unfortunately in this economic climate, many performing arts organizations are struggling financially and we have a seen a strongly negative effect on revenue,” continues Legasey, “We understand and regret that this decision will significantly impact all the members of the orchestra, the staff and their families.”

“Operating in this economic environment has been very challenging,” said CSO Board Finance Committee Chair Loren Carlson. “We have stretched the operating budget for years, but the current economic environment has brought the organization to the breaking point, and we are compelled to devise a more sustainable operating model that will enable us to continue the organization’s tradition of musical excellence.”

“The CSO aspires to be back performing next season but before we can do that we must get the organization back on a sound financial footing,” said Legasey, “We want to thank all of our patrons, donors, and sponsors who have generously supported the CSO in many ways throughout the years and hope they will continue to support the CSO during this restructuring and in the future.”

The Charleston Symphony Orchestra, the largest full-time performing arts organization in South Carolina, has been a partner in weaving the cultural fabric of Charleston since 1936. The Orchestra’s mission is to promote the enjoyment and appreciation of music among visitors and residents of the Charleston area, and to make music a vital part of the area’s cultural life. Its artistic excellence, youth education programs and community outreach have made The Charleston Symphony Orchestra a central component in the rich cultural foundation of this region.

To receive a refund:

Season ticket holders for the April 17th Merrill Lynch Masterworks performance will be contacted within the week with information on how to receive a refund.

If single tickets were purchased at Gaillard, tickets should be taken to the Gaillard Box Office for a refund.

If single tickets were purchased online at Ticketmaster or via the Ticketmaster Arts phone, Ticketmaster will contact the ticket buyer and will automatically issue refunds.

If single tickets were purchased at a Ticketmaster outlet (i.e. Publix), tickets should be taken back to the place of purchase for a refund.

Information will be sent to each 2010-2011 season ticket holder no later than May 1, 2010, listing all the options available including how to receive a refund or how to choose to continue to reserve seats if a season is performed.

The CSO will update all patrons on the 2010-2011 season and the status of its restructuring.