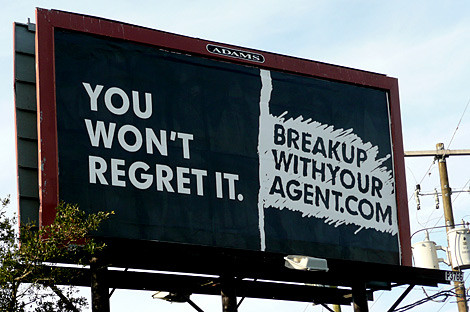 4:36 am on Wednesday February 18, 2009 | Posted by Ken Hawkins
A fuss over a Realtor's suggestion to break up with agents

Image by RehavaImage by 20090218-break-up.jpg Perhaps it's not surprising it rubbed folks the wrong way.

Rehava's campaign asks viewers "Is it time to break up with your agent?" The campaign also includes the Web site BreakUpWithYourAgent.com.

Many members are irate that Rehava appears to be actively taking other Realtor's customers -- a big no-no by Realtor guidelines.

Here's what two commenters said on the Business Journal's story, I find them both to be insightful:

I am a licensed South Carolina agent. I am also a member of the National Association of Realtors (NAR). I really see nothing wrong with this ad campaign and don't find it unethical. NAR, as well as local brokers are fighting dearly to maintain the same old worn out business model that has been in motion for decades. It's only a matter of time until this model fails. I have wondered many times how this has lasted this long. Don't get me wrong, I'll take the commission checks and ride this wave until it hits the beach, but do we really deserve make more commission on a million dollar house than we do on a $100,000 house for filling out the same forms, listing it the same way on the MLS, pulling the same public tax records (and the rest of the public records)? Both homes require the same amount of work. If fact, the $100,000 quite possibly requires a bit more hand holding. I think what Rehava has done is quite revolutionary if fact. Today's buyer is a bit more savy. They usually have taken advantage of services available online such as Zillow, Trulia, etc. Besides, with Google getting ready to get into the real estate business everything is going to change and the days of the commisioned gravy train are doomed. -- Anthony

Anthony, if you are doing the same marketing/work for your million dollar homes as you are for your 100K homes, then I would feel horrible if I were one of your million dollar clients. I'm guessing you don't have many. I see nothing wrong with Rehava's business ethics. Do I like it? No. But this is a free market. Do I feel threatened as an agent? Definitely not. I am a Realtor in Charleston as well. I know the problem lies within their business model. Salaried agents won't have the drive that commission-based ones will. Plus, Rehava is rather gimicky, and the people will know that they are getting limited service. -- John

Oh, and one thing that your should keep in mind while reading The Charleston Regional Business Journal's story is that while I think it's common to understand the word ethics as "a universal set of morals," it's defined as "a set of moral principles, esp. ones relating to or affirming a specified group, field, or form of conduct."

So, yes, Rehava could be performing unethically as per Realtor standards. As per capitalist American standards? Probably not.

At any rate, go get the scoop on the fuss over at The Charleston Regional Business Journal.

Update March 4: And the fuss continues, a little. From a February 19th article at About.com:

And, don't think that the consumer isn't noticing this backlash behavior directed at a business model they may see as a benefit to them. The media coverage is no doubt helping Mr. deGuzman's business, while portraying other area real estate brokerages as defensive of the status quo in real estate practices at any cost.