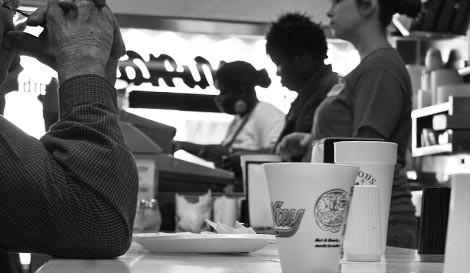 Image by Flickr user robholland Image by 20090222-nuway.jpg Nu-Way Weiners of Macon, Georgia made the list for their chili-slaw dog. Next time I pas Macon, I'm dropping in.

Garden & Gun has an article that points out 100 Southern foods at 100 spots that must be eaten, it's appropriately dubbed "100 Southern Foods You Absolutely, Positively Must Try Before You Die."

Even if you're not a foodie that can't hold out until the Food + Wine Festival, you should bookmark this article for your next road trip that cuts through the South.

Here's a bit about why from the author John Edge:

For fifteen-odd years now I’ve been documenting the stories told at our collective table, paying homage to our cooks by way of words. Still, the compilation of this list was an exercise in folly, attempted with a 100-count bottle of antacids and a modicum of hubris. I’m sure I’ll be roundly condemned for leaving out the hog’s temple boudin stuffed and steamed by Bubba Frey, proprietor of the Mowata Store, near Eunice, Louisiana. Perhaps I’ll be called a jackass for failing to recognize that the best chess pie in Christendom is baked by the nice ladies at the Whole Truth Lunchroom in Wilson, North Carolina.

But in the bites that follow, I hope that you recognize the diverse and delicious South I know and love. My idea was not to codify the best Southern eats. My aim was to assemble a sample of the sort of bounty that beckons the curious and the hungry. Upon first bite, each dish announces its peculiar terroir. And commands a second bite. Then a third.

You'll note a half-dozen or so place in or near Charleston that highlight new and old things (take the "boiled peanut cotton candy" at McCrady's, or the okra soup at Bertha's Kitchen in North Charleston. But don't just skim the list for local, look for what intrigues and then plan a diversion from your next Interstate journey. Not only will you get some great eats, but there's nothing quite as spectacular as a drive down an old Southern road.

Go check out the story, and the map of mentioned places. -- Do note that the article is five pages, don't miss the small page button on the bottom right of the story.

Savvy readers will note that the article is from all the way back in November of last year. So, I do feel bad about plugging something old, but seeing as so few of us read Garden & Gun, I feel less bad.