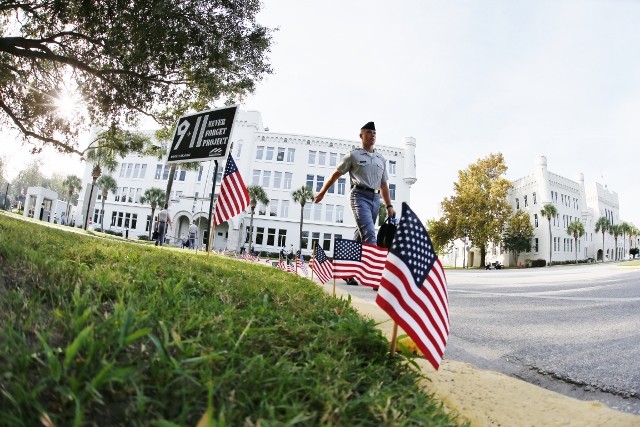 CHARLESTON, S.C. – Benjamin Franklin, one of the 39 who signed the United States Constitution said shortly thereafter, “Our Constitution is in actual operation; everything appears to promise that it will last; but in this world nothing is certain but death and taxes.” He might be pleased to know that the Constitution did last and that there is a national day of observance dedicated to it.  The Citadel has made a point of teaching the Constitution since the founding of the college in 1842, and now holds an annual Constitution Day celebration in conjunction with the national observance of one of the most important days in American history.

Under the leadership of Professor Scott Segrest and the Department of Political Science, The Citadel’s School of Humanities & Social Sciences will host two on-campus events related to its Second Annual Celebration of Constitution Day.

The first is a lecture entitled "The War Power, the Executive Power, and the Rule of Law”.

“Political philosopher and American constitutional law theorist, Dr. James Stoner, will be presenting this timely lecture. This theme will have a special poignancy on 9-11 and at a time when renewed turmoil in the Middle East with ISIS in Syria combined with what is happening in Eastern Europe between Russia and the Ukraine raise speculation about possible U.S. military action in one or both regions,” said Segrest.

Stoner has said that  contemporary disputes about “who ought to exercise war powers (in contemporary times) cannot be settled without revisiting the question of what war is and when it can legitimately be undertaken.  Law and justice, in other words, serve not only to constrain war, but also to give it purpose and effect.” His presentation will take place at 7 p.m. on Sept. 11 in room 165 of The Citadel’s Bond Hall.

The second event will be a public reading of the Constitution by Citadel cadets on Sept 17, the official observance date of the 2014 Constitution Day.  The reading will begin at 7p.m. in room 165 of The Citadel’s Bond Hall.

“The purpose of these programs is to promote a better understanding of how the United States Constitution, more than two and one quarter centuries after its drafting, continues to be the fundamental safeguard of American liberties and an essential guide to the exercise of principled leadership  in American life,” said Bo Moore, Dean of Humanities & Social Sciences.

Both events are free and are open to the community. Campus parking is available at no charge.

Also on September 10, at approximately 6:30 p.m., The Citadel Republican Society (CRS) will continue its tradition of placing flags along the Avenue of Remembrance on campus, preparing the display in memory of those who lost their lives in the terrorist attacks on the World Trade Center and the Pentagon on September 11, 2001. The Citadel’s display is affiliated with the Young America’s Foundation, which began the Never Forget project in 2003.  The CRS has participated in the program for nine years. The mission of the club is to foster patriotism, political participation, Republican values and civic service among members of the South Carolina Corps of Cadets.

The Citadel is a four-year, public college in historic Charleston, South Carolina. The Citadel offers a classic military college education for young men and women profoundly focused on leadership excellence and academic distinction. Graduates are not required to serve in the military but about 35 percent of each class commission as officers in every branch of U.S. military service. Graduates of The Citadel have served the nation, their state and their community as principled leaders since the college was founded in 1842. The Citadel Graduate College offers more than 40 Master's degrees and graduate certificates in a wide range of disciplines, plus five undergraduate programs, through an all-evening schedule. Some graduate courses available online.