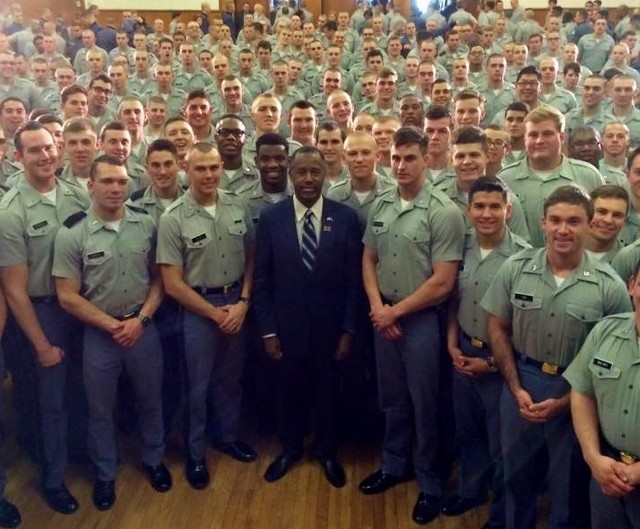 Presidential candidate Dr. Ben Carson speaks to The Citadel Republican Society in 2016
9:47 am on Wednesday May 18, 2016 | Posted by The Citadel
Taking the political temperature at The Citadel

The political atmosphere in the U.S. is thick. It is charged with the kind of non-stop buzzing that can be heard when standing near those giant overhead powerlines near transmission towers; it can be mesmerizing and terrifying all at once. Much of that political energy has passed through The Citadel’s campus in the past 18 months or so in the form of presidential candidates, or those considering candidacy. Jeb Bush, Ben Carson, Carly Fiorina, Bobby Jindal, John Kasich, Rand Paul, Rick Perry, Marco Rubio, Rick Santorum, Donald Trump, and Scott Walker, were all either hosted by a cadet-run club called The Citadel Republican Society or held their own events on campus sponsored by their campaigns or other supporters.

Far before these people formally entered the race, in fact decades before, the college started what is now the well-known and respected Citadel Symposium on Southern Politics. The first symposium was held in 1978, propelling the college forward along on its course as a major player in the study of political science.

In 2016, some of the most educated political thinkers and intellectuals participated in the two-day symposium in the spring. There were 13 different panels with titles such as Partisan Realignment in the South, Race in 21st Century Southern Politics, and State Politics in the South. Naturally, given the current affairs of the nation, much of the attention went to the final session of the symposium entitled Roundtable on the 2016 Elections. It featured six political science academics from six southern universities, many of whom had held high level positions in the realm of politics earlier in their careers.

The panelists provided their opinions about trends surrounding the election and the candidates, themselves. The general consensus of the panel was that Donald Trump was a showman, with an innate ability to gain and keep a crowd, and the support of that crowd. It was noted that this kind of ability, however good or bad, goes a long way in a political campaign. It was interesting that unlike Trump, none of the other candidates were spoken about so thoroughly. Then the conversation shifted. One panelist asserted that all of the candidates should spend more time campaigning on college campuses, especially the democrats. All of the panelists agreed.

In my opinion, that panelist was right─ not enough rallies are being held on college campuses during this or other election cycles in more recent history. Cadets at The Citadel have an unusually significant number of opportunities to hear and even meet political leaders, but many college-aged people do not.

According to a recent article from USA Today College, the voter turnout for college-aged students has been underwhelming in recent years because students do not feel attached to a community. Young adults tend to move around a lot, attempting to find their niche, making them feel as though they have no say in how a government should be run. Additionally, the most consistently debated issues, like social security, are not as important to the younger voting demographic because they seem too far off to be relevant. If more candidates showed up to college campuses and tailored their speeches to the college-aged population, more young people may feel inclined to vote. They did in 2008 and 2012; it was the young and minority voters that carried Barack Obama to the White House. And it is a growing population, according to a recent article in the Wall Street Journal showing that younger voters (18 - 29) now equal the number of voters in the Baby Boomer group.

Another point the panel made concerning the youth of America was the apparent lack of understanding about the connection between pop culture and politics. They all agreed that candidates without a clear understanding of what is important to the younger voting segment and how to communicate to them are diminishing their chances of victory. The political references on popular shows like Saturday Night Live and Stephen Colbert, and endorsements of candidates by currently relevant celebrities like Uzo Aduba and Katy Perry, readily capture the attention of potential voters who are younger.

The panelists’ assertions of trends within the 2016 presidential election made a great deal of common sense. Yes, the college-aged population cares about serious issues, but candidates should first get them “in the tent” by connecting with them in person on campuses, or through the integration of popular culture into their campaigns. College campuses are there for the taking - most with organizations that would readily host or at least help welcome candidates from both parties. It shouldn’t be just cadets at The Citadel who have the distinct advantage of reading the lips of candidates (Republican ones anyway) in person as they discuss their thoughts and proposed policies.

Cadet Ali Guild is Regimental Public Affairs Officer for the South Carolina Corps of Cadets and a member of The Citadel Class of 2017. She is a political science major from Mooresville, North Carolina.