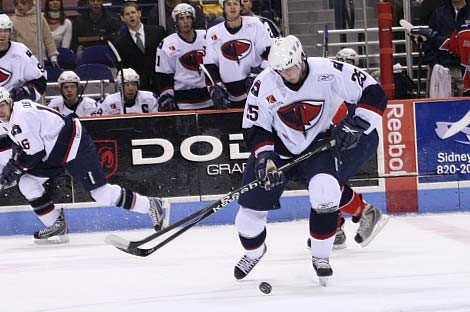 Despite taking the lead, the Stingrays lost to the Dayton Bombers 3-2 before some 5,000 fans on Saturday, November 22.

The Stingrays say about the game:
The game would stay tied at two until 12:23 when Dan Riedel fired a shot off the glove of Neuvirth that trickled over the goal line giving the Bombers their second lead of the night, 3-2.

The third period was a defensive chess match in which neither team had many chances. The Rays finished the period with only four shots on net and the Bombers had only six shots. Bednar pulled Neuvirth in the final minute of play in favor of the extra attacker to try and tie the game up, but they were unable to get anything past Drew before time expired.

The winning goaltender was Drew who stopped 18 of the 20 shots that he faced. Neuvirth was the losing goaltender, as he stopped 27 of the 30 shots he faced. The Rays went 0-3 on the power play while killing off two of the three short handed situations they faced.

The Stingrays are now 9 and 4. They'll take on the Mississippi Sea Wolves at 5 p.m. tonight, November 23.