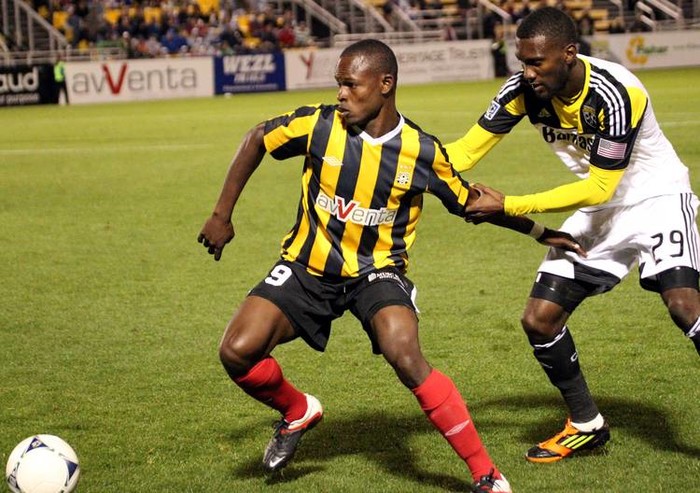 2:43 am on Sunday February 26, 2012
In first round of Carolina Challenge Cup, Charleston draws with Columbus

The Charleston Battery took on Major League Soccer's Columbus Crew in their first game of the 2012 Carolina Challenge Cup in front of 5,767 at Blackbaud Stadium.

The Battery came from behind twice with goals from Dane Kelly in the 40th minute and an 89th minute PK from midfielder Jose Cuevas to earn the draw.

Minutes into the first half Columbus Crew's Ethan Finlay played Eddie Gaven in the box. Gaven tucked the ball in the corner just past Alec Kann to give Columbus a 1-0 lead.

In the 40th minute the Battery's Jose Cuevas took the ball down the line and slipped a cross in behind the Crew's defense. Gruenebaum miss cleared the ball creating havoc in the six. Charleston Battery forward Dane Kelly was in the perfect position to tap the ball home. The score remained tied at 1-1 going into the second half.

In the 57th minute of the game, the Crew's Emilio Renteria and Battery's Charlie Romero fought for the ball inside the 18 yard box. Renteria went down with the contact and the referee awarded Columbus a PK. Milo Mirosevic put away the penalty kick to put Columbus ahead once again.

The remainder of the game was evenly possessed in the midfield. The Charleston Battery pushed forward more and more as the game wore on and were rewarded for their efforts in the 89th minute as the Battery's Salieu Bundu was brought down inside the box by Carlos Mendes. Midfielder Jose Cuevas finished the penalty kick to even out the score.

The Charleston Battery's next game is against the Carolina Challenge Cup defending champions, D.C. United on Wednesday, February 29, at 7:15 p.m. in the second round of the tournament.

In the first game of the 2012 Carolina Challenge Cup Major League Soccer's D.C. United defeated the Chicago Fire 1-0 with a goal in the 65th minute by forward Hamdi Salihi.

Chicago has a PK saved in the first half and despite ctreating a number of chances were unable to break down a stubborn United defense. The Chicago Fire play the Columbus Crew on Wednesday night at 5 p.m.