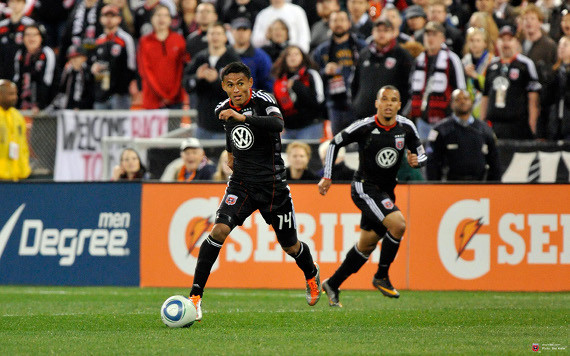 Major League Soccer’s D.C. United beat the Charleston Battery by a score of three goals to one Wednesday night at Blackbaud Stadium in the 2012 Carolina Challenge Cup.

Hamdi Salihi was credited with the game winner in the 87th minute when he tucked the ball past Battery goalkeeper, Mitch Hildebrand.

United opened the scoring in the 13th minute when Maicon Santos received a through ball from Branko Boskovic. Santos ripped a shot to the near post scoring his chance on Battery’s first-half keeper, Kevin Klasila.

The Battery pulled level in the 28th minute when Mark Wiltse carried the ball to the goal-line and cut a cross back for Jose Cuevas to finish. Cuevas scored his second goal of the tournament evening out the match.

Just seconds later, D.C. United’s Jose Burciaga crossed a ball from the left side to Ryan Richter who answered with a header through Klasila’s hands. The score remained 2-1 with D.C. United ahead going into the second half.

In the 77th minute the Battery was forced to play with ten men for the remainder of the match after Mark Wiltse was ejected for a tackle from behind. The Battery had some quality chances in the second half but they couldn’t seem to capitalize on United’s strong defense.

The deciding goal came in the 87th minute when Hamdi Salihi of United pushed the ball past Charleston goalkeeper Mitch Hildebrand. Salihi combined with Josh Wolff and Andy Najar to neatly placed the ball home. D.C. secured the win and therefore, clinch the title of the Carolina Challenge Cup for the third year in a row.

The Carolina Challenge Cup concludes on Saturday with D.C. United playing Columbus Crew at 5 PM followed by the tournament finale as the Charleston Battery battle the Chicago Fire at 7:15 PM.