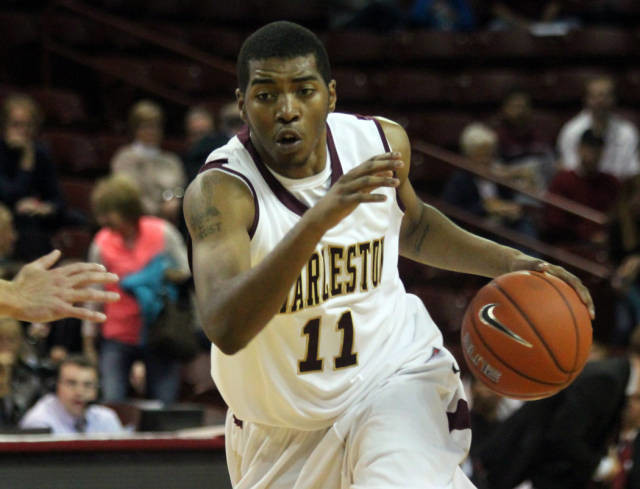 Image by Provided by CofCSports.com Sophomore Nori Johnson scored a career-high 27 points to lead the Cougars to an 80-73 road victory at Kent State.

Sophomore Nori Johnson (Greer) scored a career-high 27 points including 16 in the first half of play as College of Charleston handed Kent State only its second home loss of the season, 80-73, in an ESPN Sears BracketBusters matchup held on Saturday night before a crowd of 3,682 at the M.A.C. Center in Ohion.

Senior Antwaine Wiggins (Greeneville, Tenn.) scored seven crucial points in the last two minutes, including a 5-for-6 performance from the charity stripe, to seal the victory and snap the Golden Flashes' seven-game win streak.

Wiggins registered 17 points and eight rebounds and switched over to his normal spot on the wing to the point guard position after junior Andrew Lawrence (London, England) fouled out and Kent State only down by five, 68-63, with 4:15 to go.

The Cougars went into halftime with a 36-33 lead after chipping away at a 17-5 deficit beginning with the first of four three-pointers by Johnson, who got CofC within six, 17-11, at the 10:33 minute mark.

CofC started the second half strong on a 9-0 run and led by as many as 19 points twice on a pair of three-pointers off the bench from sophomore Jordan Scott (Darlington, S.C.) at the 10:30 and 8:58 minute marks. The Cougars have now won four of their last five under CofC Interim Head Coach Mark Byington.

Sophomore Trent Wiedeman (Suwanee, Ga.) also contributed to the road win with his ninth double-double of the season with 14 points and 13 rebounds.

Get more game notes and stats at CofCSports.com.

Kent State, who had previously only lost to Cleveland State with an 11-1 home-court mark going into the contest, played without the services of leading scorer Justin Greene, who missed the game with an ankle injury. The Golden Flashes were paced by Carlton Guyton and Chris Evans, who each had 16.

The Cougars will return home and host South Division foe Georgia Southern (14-12, 12-4 SoCon) in their regular-season home finale on Thursday, Feb. 23 at TD Arena. Tipoff is scheduled for 8 p.m. (ET) and the game will be televised live locally on MyTV Charleston and carried nationally on ESPN3. Wiggins, the team's lone senior, will be honored prior to the game in a special Senior Night ceremony.