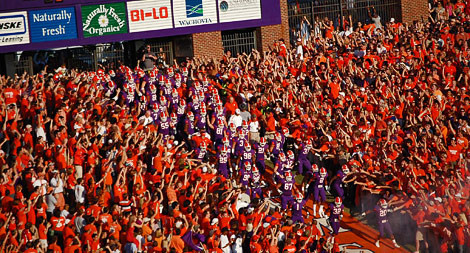 Image by flickr user BlueSun PhotographyImage by 20080722_clemson_football.jpg The team picked to win the ACC title has, historically, won it 66 percent of the time. It's good reason for the team to be excited.

For the first time since 1991, Clemson has been voted the most likely to take the ACC title this season. Also, 1991 was the last year Clemson won the ACC title: It was the year before Florida State entered the league.

A press release quoted Head Coach Tommy Bowden:
“A big reason we are the preseason favorite is our returning offensive skill position players. But, we have holes to fill in the offensive line - we must replace four starters, including two All-Americans. We also have three new linebackers.

“I believe our players will embrace this and it will motivate them in our August practices. But it will also motivate the opposition, including our non-conference opponents. We will get everyone’s best shot.

“We appreciate the respect, but the objective is to earn it on the field by the end of the season. We have a lot of work to do to achieve that.”

This is the sixth time Clemson has been chosen since 1976. Clemson won the title all but once. Predictions of the winning team have been accurate 66 percent of the time.