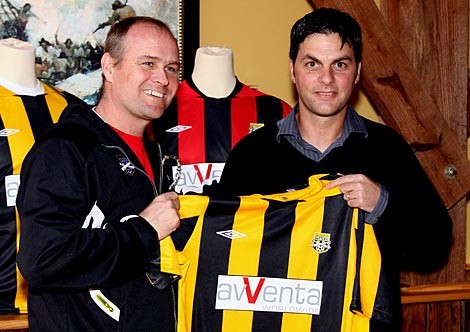 The Charleston Battery has a new jersey and a new sponsor, avVenta.

You can buy both the home and away (red stripes) jersey for $55 each.

Here's all the gory details from an e-mailed press release:

Charleston, SC – The Charleston Battery, has teamed-up with digital services firm, avVenta Worldwide, who will become the Official Jersey Sponsor for the team. Beginning with the 2009 season, the Charleston Battery will wear a new custom UMBRO jersey, featuring a gold and black stripe for the home kit and a red and black stripe for the second kit. The avVenta logo will be prominently featured on the front and back of each player’s jersey.

"The Charleston Battery played a large role in my journey to this great city and so, to have this opportunity to demonstrate support for the team means a lot to me personally," said avVenta Vice President and former Battery defender Jamie Posnanski. "As a global company, avVenta is thrilled to sponsor the world's most popular sport right here in our own backyard. Access to top-notch sporting venues and organizations like the Charleston Battery are part of what make this city so special."

New UMBRO Jersey -- In 2009 the Charleston Battery will wear new UMBRO uniforms including a custom-designed new home jersey. The 2009 home jersey incorporates the traditional Charleston Battery colors, gold & black vertical stripes similarly striped sleeves. The jersey features UMBRO’s Climate Control fabric which is designed to wick moisture away from the players body and also to remain as light as possible during games.

Jersey debuts on Saturday during Carolina Challenge Cup -- The Charleston Battery opens its 2009 preseason Saturday night with a game versus Major League Soccer’s Toronto FC at Blackbaud Stadium (7 PM). The match is part of the Carolina Challenge Cup that also features MLS’s Real Salt Lake and DC United who square off in the first game of the double-header at 5 PM ($10-$18, 971-GOAL / charlestonbattery.com).

About avVenta Worldwide is a privately held company that specializes in digital production and Interactive Services, two distinct domains that support digital/interactive marketing strategies. The company provides its services through its digital production and rich media services arms, avVenta Worldwide and Studio V. The company has strategic partnerships with a number of technology and services firms including IBM, Microsoft, Digitas, Adobe, PointRoll, Web Trends and many others.

Founded in 2005, avVenta employs more than 500 employees in offices in the US and Costa Rica. Headquartered in Charleston, SC, the company has international offices and training facilities in San Jose, Costa Rica. avVenta, along with its related companies, has won a number of awards for its outstanding work with clients, including three from Microsoft: Partner of the Year, Solution Company of the Year, and eCommerce Solution Provider of the Year. For more information, please visit www.avventa.com.

The Charleston Battery pro soccer team was formed in 1993 and moved to its present home, Blackbaud Stadium in April 1999. In 2009 the Battery celebrates its 17th anniversary and will once again compete in the USL First Division. The Battery’s 2009 home opener is set for Saturday, April 18 vs long-time rival the Montreal Impact with a spectacular fireworks display immediately following the game. For more information please visit www.charlestonbattery.com.