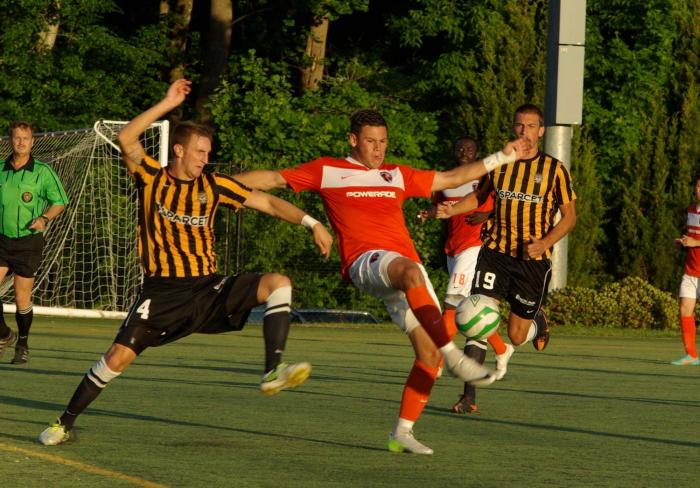 Charleston Battery
4:04 am on Wednesday May 15, 2013
Battery winning streak snapped at Charlotte Eagles

A five-game winning streak ended Tuesday night as the Charleston Battery lost to the Charlotte Eagles by a score of one goal to nil at Queens University Stadium.

The Battery could not answer a second half free-kick goal from Charlotte defender Shaun Francis.

"It's a disappointing result as we defended very well for ninety minutes but unfortunately gave up a set piece at the top of the box that they buried", said head coach Mike Anhaeuser. "We'll re-group and work to start another winning streak as we did after the Richmond game."

The loss was the Battery's first since the April 13th opener in Richmond but Charleston (5-2-0) remains in second position in the USL PRO standings.

The win extends Charlotte's unbeaten start to the season. the Eagles improve to (3-0-3) and move up into a tie for the sixth spot.

Charlotte created the first chance of the game in the 10th minute from a corner-kick that was rolled short. The ball was then crossed to the edge of the six yard box but Christian Martinez's first time shot flew over the bar.

Charleston's best chance of the half came to midfielder Emmanuel Adjetey in the 18th minute after Charlotte cleared the ball from inside the box. Adjetey attempted a first-time volley but saw his effort slam into the side-netting.

Neither side managed to carve out any more clear cut chances until just after the hour mark when the Battery conceded a free-kick at the edge of the penalty-area. Francis took the kick and curled his shot around the Charleston defensive wall and into the right side of goalkeeper Odisnel Cooper's goal.

The Battery responded with a flurry of attacking substitutions that saw forwards Dane Kelly and Heviel Cordoves both introduced. Charleston pressed forward looking for an equalizer and almost found it in the 82nd minute as Emmanuel Adjetey picked out Dane Kelly in the box. Kelly managed to get past his defender but blasted his shot over the bar.

In the 87th minute the Battery threatened again with Cordoves running through on the left side. Cordoves controlled the ball as he entered the box but his left footed strike was smothered by goalkeeper Eric Reed.

The Battery heads to Houston, TX on Sunday for a 11 AM match versus MLS's Houston Dynamo reserves (Sports Radio 1450 AM).