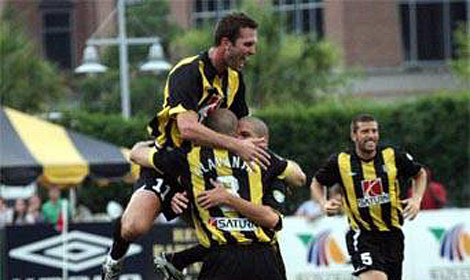 The Charleston Battery have bested the Seattle Sounders and now have the lead in the USL First Division. The Battery won with a single goal scored by forward Lazo Alavanja during the game's 10th minute. The game pulled in 3,371 spectators, a 66 percent capacity crowd at Blackbaud stadium.

A writeup from the team:
"Getting a win tonight is a big thing — it gets your confidence going", [head coach Mike] Anhaeuser said. "We're getting goals all over the field, and our defense got a shutout tonight. We're going to need all that again Tuesday."

In the hot and humid Charleston weather, the host Battery enjoyed some early possession — perhaps taking advantage of a lethargic Sounders team who were just two days removed from a 2-2 tie with the Carolina RailHawks.

"We really wanted to push the tempo and take it to them," Anhaeuser said. "Seattle is a team that likes to press, even after playing three games in six days. But our guys defended well, created chances and really played a complete game. We really never gave them a chance."

The Battery now have eight wins, three losses and three ties. Past game results are available on their Web site.

The Battery's next game is at 8:30 p.m. Tuesday against FC Dallas in the US Open Cup quarterfinals in Frisco, Texas. You can watch the game online, but a quick scan of Comcast's listings did not show the game being televised.

Their next league game is Saturday (July 12) against the Puerto Rico Islanders.