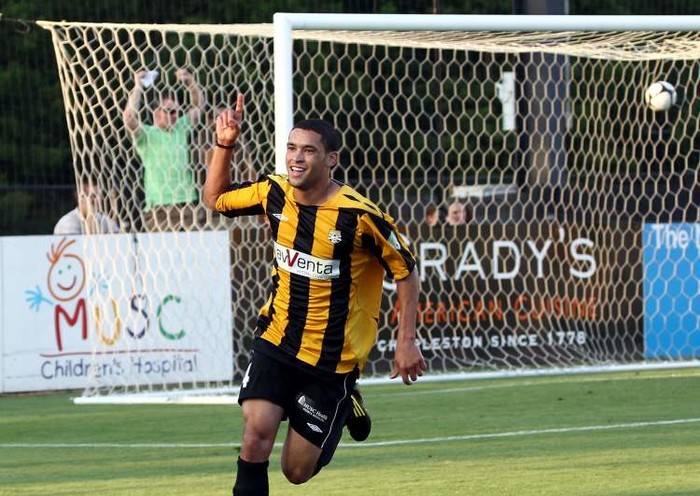 Image by Charleston Battery Neagle celebrates his second at Blackbaud on Friday night.

Next up for the Battery is a first round U.S. Open Cup match versus CASL Elite on Tuesday, June 15th, at 7:30 p.m. at Blackbaud Stadium.

But back to last night's game.

“It’s great to turn on the T.V. this morning and watch two World Cup games and then coming out tonight and getting ahead by two goals early in the game and getting two more late in the game” said head coach Mike Anhaeuser.

Charleston’s first goal of the evening came from a free kick after Tom Heinemann was fouled hard just outside the box. The free kick sailed through the air where it was met by Ian Fuller who headed across the box. Lamar Neagle was well placed to receive the header and finished with a bicycle kick to the back of the net in the 10th minute.

Shortly afterwards in the 12th minute, the Battery scored their second goal of the game. Heinemann made a strong pass through the Richmond defenders to Neagle who brushed past goalkeeper Ronnie Pascale with a shot to the lower right-hand corner of the net.

The next major chance for the Battery resulted from a Stephen Armstrong free kick in the 32nd minute. Armstrong’s kick curved in to meet Heinemann for a header that just grazed the cross bar

In the opening minute of the second half, Kickers midfielder Johnny Villenvava made a breakaway towards Battery territory and took a shot just wide of the net. A few minutes later, Richmond pulled a goal back as former Battery midfielder Mike Burke crossed the ball from the left side meeting teammate Matt Delicate for the goal.

Heinemann fired back for the Battery beating Richmond’s last defender with the dribble from an Alioune Gueye pass to score Charleston’s third in the 74th minute.

Substitute forward Amaury Nunes added a fourth in stoppage time after receiving a Levi Coleman pass at the edge of the six yard box.