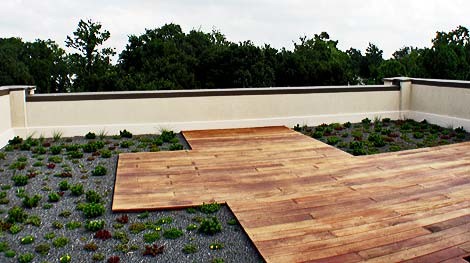 "Living roofs" are all the rage as energy prices skyrocket and the environment comes under fire, and I'On has added its first home with one. Here's what they had to say:
Living roofs, as you may have heard, offer many benefits to the buildings, neighborhoods, and cities in which they are placed; Atlanta, for example, has recently seen an increase in green roofs on city and commercial buildings to combat the urban heat effect, which is especially distinct there as a result of the city’s extensive sprawl. Living roofs, or green roofs, can also capture rainwater, reduce runoff, produce oxygen and trap carbon dioxide, increase a home’s insulation (thereby decreasing its’ energy consumption), and lengthen a roof’s lifespan. Not to mention, of course, that they can make an excellent resting point for tired migrating birds!