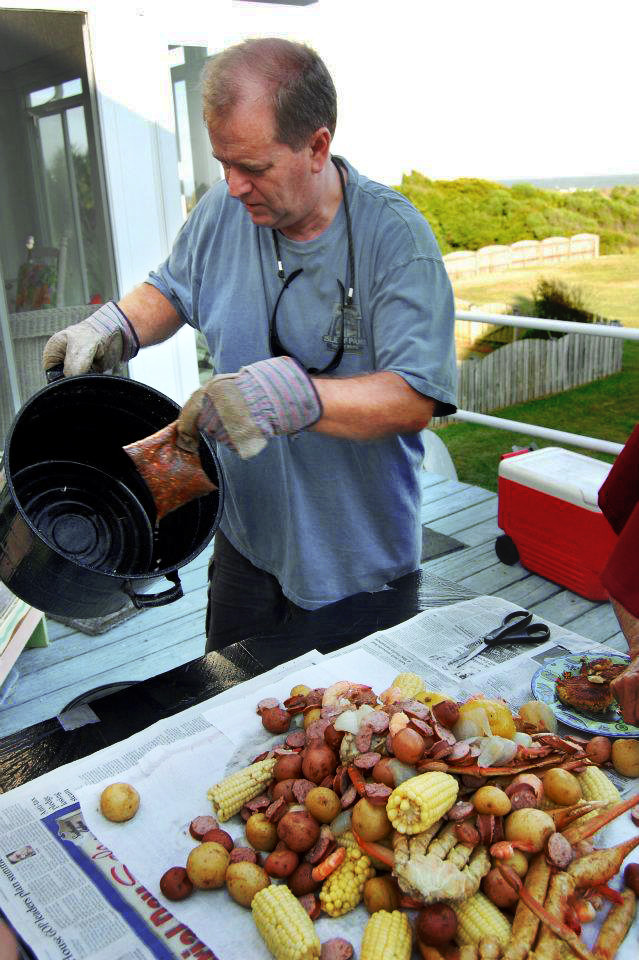 ﻿There is something satisfying about the sticky feeling of meat juices and spices coating your fingertips, that glaze that doesn't yields to a paper towel. You've gotta use soap and water. You're lazing on your back porch with an empty plate of chicken bones in front of you. One side of the plate is smeared with Heinz 57. The bones are half covered with a crumpled paper towel.

Or maybe it's the old bay burning into the corners of your lips and staining the creases of your palms. Last Sunday's newspaper is covering the table and you're pushing empty shells and claws out of the way to read the recipe for key lime pie.

Either way you know it's summer.

Either way you know you live south of the Mason Dixon line, and happiness in the south is a messy summertime meal on your porch with friends and family. 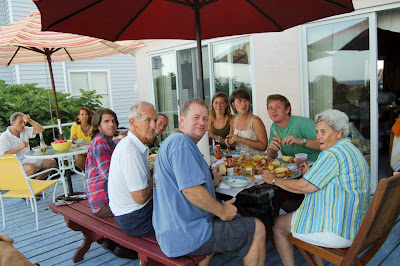 The family who taught us how to do a southern summer right.  Notice the canine cleanup crew in the corner. (Photo Courtesy of M.J.)

I grew up in the Annapolis area of Maryland. We lived within moments of a Chesapeake Bay tributary for almost my whole life.

But I didn't realize just how important blue crabs were to summertime until I made my move further south this April.

I've noticed that down here y'all always serve 'deviled' crab rather than straight. You've got to input the Creole holy trinity thing (onion, celery, and bell pepper) into every dish. I'm not dissing your crab cakes, but for me, they disappoint. I'm used to jumbo lump sweet white chunks of fresh crab just gently tossed with a bit of egg and some seasoning to keep it together in a lovely soft springy meat cake. Mmmmmm.

Put aside the cakes though. What I need is an extra large blue crab plucked straight outta the pot from the neighborhood dock. Or caught by a friend who spent his day dangling chicken necks off the edge of the old Naval Academy bridge. That's my summertime. That's my blue crab.

When was a child, before I learned to pick crabs, Mom and Dad would get stuck crunching claws and puncturing holes in their fingers just to make me piles of crab meat. I'd dunk it in old bay, then melted butter and right in my mouth. 'Mowh' I would say, batting my eyes and opening my mouth like a bird.

I remember how excited I would get to see those big wooden baskets with little blue pinchers poking out of every open space. Dad would pull out his burner, grab the biggest pot in the house, and Mom and I would melt the butter and gather crab mallets, knives and newspaper to set the table. Soon all our friends would arrive with ice cold beers and everyone would sit on the deck and feast.

The summers I've spent down south I've adopted the shrimp boil courtesy of family friends on Isle of Palms. After a day on the beach it's the most satisfying meal I can think of.  It's my New Yorker Nana's favorite meal. She requests it every Mother's Day. She won't touch the blue crabs in Maryland but she loves fresh shrimp from Shem Creek. We like to add potatoes and onions and lemon and a nice spicy sausage. The trick is to make sure to have to dogs around for cleanup under the table.

3) Have a Fried Chicken Dinner

4) Make Some Good Friends to enjoy it all with

Head to the source at