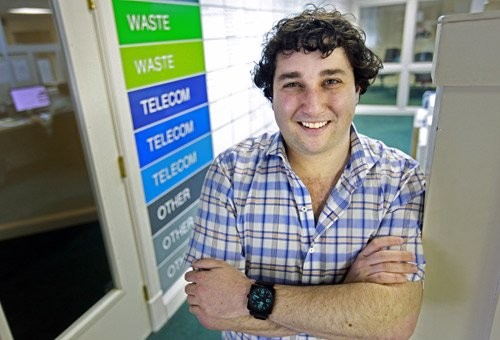 Launching a new business during a recession can be a risky proposition, but it's working out well for Dan Schneider, who makes it sound easy.

Schneider, a 31-year-old high school dropout from Pennsylvania who has created and sold several businesses, says he launched Charleston-based SIB Development & Consulting in 2009 because he was bored.

"I was bored and the economy was terrible, and I thought about what kind of company I could start," he said.﻿﻿

A company that helps other businesses save money was the idea Schneider settled on, and the result was a fast-growing enterprise that now has about 50 employees.

He said he had been toying with the idea of such a business for years, and was aware of the concept because a similar company approached him years earlier, when he was running a group of cellphone stores.

So Schneider launched SIB, Solutions Integrated Business, and used his track record as a business owner to land his first clients.﻿﻿

"We're creating jobs and we're saving businesses money," he said, during an interview at SIB's offices, which are expanding to occupy the third floor of the Community First Bank building in downtown Charleston. "If we don't save you money, don't pay us."

Schneider and his company have been profiled in business magazines and covered by The New York Times, CNN, Fox News, National Public Radio, Forbes, Investors Business Daily, USA Today and others.

Schneider's dropout-to-business-wiz story has driven much of the press, as have some of Schneider's initiatives at SIB, such as promising employees a $50,000 bonus if they stay with his firm for five years, or requiring employees who make serious errors to buy ice cream for everyone in the office.

"If I was a 45-year-old CPA, we probably wouldn't get the press," he concedes. "I think it's hilarious. I'm doing consulting for colleges and the last grade I completed was ninth grade."﻿﻿

Schneider was a teenager living near Doylestown, in eastern Pennsylvania, when he started his first business after dropping out of high school at age 16. He had been hired by an out-of-state firm to make balloon animals to entertain customers at T.G.I. Friday's restaurants, then decided to launch a rival company that managed and provided such entertainers, rather than being the guy working for tips. In a roundabout way, that business led to a sales job in the cellular phone industry, a relatively new craze at the time, and that job led to Schneider opening his own cellphone store at age 18. Two years later, he had a dozen locations, and had bought his own house. Then he sold off the phone stores and launched a wholesale company that primarily helped large corporations sell off their unwanted cellphones. After growing that company to $35 million in annual gross revenue, Schneider said, he decided he needed a break, so he traded ownership of the firm for future royalties and set off to travel and relax. After several years, Schneider wound up in Charleston to visit friends and do some kiteboarding. And that's where boredom struck after a few months. With that kind of a backstory, one might expect Schneider to be a sharp-dressed self-promoter. But he's a guy who dresses very casually for work unless he has a meeting. A kiteboard sits in the corner of his neat, professional office. And he doesn't pitch a hard sell.

To Schneider, the things he's done and the business he now runs amount to using common sense and taking advantage of opportunities. Even his widely reported promise of $50,000 bonuses for five-year employees, a top story on CNN online when it was first reported, is based on a sober calculation. "It wasn't a public relations stunt," said Schneider. The way he see it, his company doesn't offer retirement benefits or profit-sharing or a 401(k) plan, and he doesn't want to deal with the costs and administrative headaches of offering such things. So instead of paying someone to run a retirement plan, and making contributions to workers' accounts, Schneider promised lump-sum bonuses to employees who stick around. He knows that some employees will likely leave for various reasons before the five years are up, and for the others, the bonus offer helps him reduce turnover and training expenses while also making up for benefits his company doesn't offer. In SIB's offices, a few dozen relatively young adults were working away this past week, crunching numbers on spreadsheets to analyze clients' expenses. A huge whiteboard on one wall tracked the progress of different accounts. Schneider said other employees work at home as full-time contractors, often "gray-hairs" with industry-specific expertise, in fields such as communication services, waste hauling, tax credits and workers compensation. "We're going to see if there are billing errors, and if contracts have been followed," he said. "Maybe they (clients) could save $10,000 a year on their cellphone plans, but they don't have three days to look into that." "Even if you think you have a good deal, you don't know what the guy down the street pays," Schneider said. His company typically works for large companies, and with businesses with multiple locations, such as restaurant franchises. In January, SIB announced that if it could not find at least $25,000 in annual savings, for a company with at least 10 locations or 200 employees, then SIB would pay that company the difference. "I would love to actually fail and have to write someone a check," Schneider said, because then people would know his guarantee is for real. Looking ahead, Schneider said he hopes to split his time between Charleston and the Philadelphia area, but he plans to keep SIB in Charleston.﻿﻿