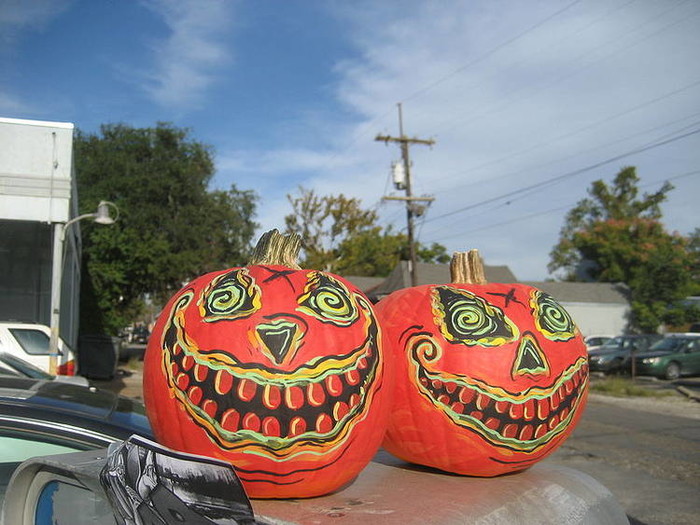 Legends of Halloween: Who Thought This Up Anyway?

“From ghoulies and ghosties and long- leggety beasties And things that go bump in the night, Good Lord, deliver us.” Old Scottish Saying

It is time to begin making your Halloween plans in Charleston. One of Marcia’s earliest Halloween memories is of standing dumbstruck on the doorstep of a house in her neighborhood. Late getting into costume that year, she had missed the wave of small witches, ghosts and goblins who journeyed the neighborhood together. With younger sister Mary in tow, they approached the first house. They rang the bell and a lady with dark, tight curls appeared.

“You have to say trick-or- treat,” the lady said. Surely not, Marcia thought. “You have to say trick-or-treat,” the lady insisted. Marcia had not anticipated being required to speak. She would just wait this out. The tight curled lady stood resolute. Finally, sensing little alternative, Marcia whispered, “Trick-or-treat.” Plunk, plunk, plunk went the candy. Marcia and her sister fled down the sidewalk. Stopping, they stared into the darkening neighborhood. Would all houses insist on the utterance of trick-or-treat?

Suddenly, Marcia had a plan. “Mary, when we get home, would you like extra candy from my bucket?”  Mary smiled affirmatively. “OK, when we go up to a door, say these words really, really loudly….” That evening’s candy haul was a huge success.

Halloween’s roots are generally believed to be the Celtic festival Samhain, although Halloween has other influences. Samhain is a word meaning end of summer and was the Celtic equivalent of New Year’s Eve. The Celts believed those who had died within the past year rose that day and began their journey to the other world; flooding this world with spirits, ghosts of loved ones and other underworld creatures.

Samhain was celebrated with bonfires to honor the dead and to keep the dead from coming too close. The Catholic Church attempted to Christianize the festival by redefining November 1st as the Christian Feast of All Saints. Later, November 2nd became All Souls’ Day, a day to pray for the souls of the dead. The word Halloween is a shortening of All Hallows Eve.

Celtic traditions included hollowed out turnips carved into scary faces with burning wood coals or candles inside. These lanterns were thought to scare off evil spirits. Settlers in America discovered the North American pumpkin to be softer and easier to carve, and began the American tradition of faces carved in pumpkins. There is also a legend of an Irish man named Jack, a stingy and bad but clever sort, who outwitted the devil into promising not to take him to hell.  Unfit for heaven as well, Jack’s spirit roams the earth with his lantern becoming, Jack O’ Lantern.

Costumes were worn to scare away bad spirits or to disguise a person from ghosts, who might want one last fling at mischief or revenge. During the Middle Ages, Great Britain and Ireland had a tradition called “souling” in which children and poor people would go door to door begging for food and cakes in exchange for praying prayers for the dead on All Souls’ Day. This is thought to be one of the origins of our trick or treat tradition.

Scotland has a Halloween tradition called guising. Guising is similar to trick-or-treating except children must perform a song, tell a joke or other form of entertainment before receiving their treat.

Many of our contemporary traditions are rooted in ancient traditions. Our Halloweens have been a time of festivals in the park, fog drenched doorways lit with orange pumpkin light and laughter as costumed children line up for candy.

We are very grateful that, unlike the Celts, in our Halloween experiences we never had to worry about those ghosts and goblins being real!

Gordon Mercer is past president and on the Board of Trustees of Pi Gamma Mu International Honor Society and professor emeritus at Western Carolina University. Marcia Gaines Mercer is a published author and columnist. They were married in Charleston and have a place in nearby Garden City.