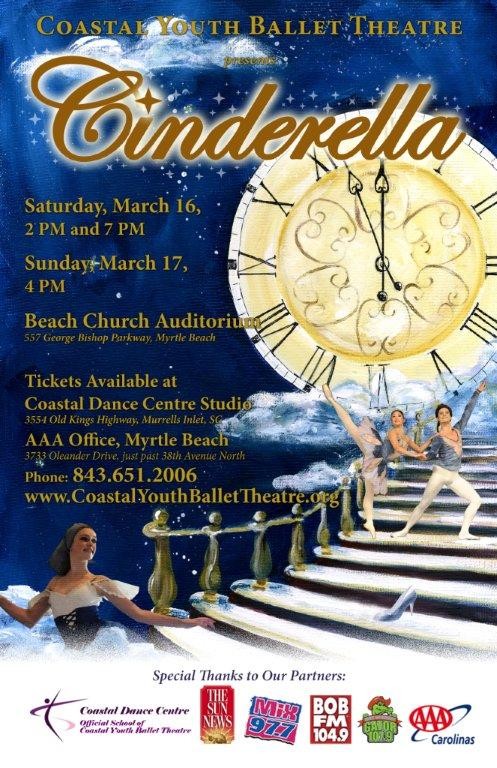 Coastal Youth Ballet Theatre, the areas only performing ballet company will present the fairytale classic, Cinderlla, March, 16-18. Coastal Youth Ballet Theatre is a non-profit 501(c) (3) dance organ-ization and its mission is to train, inspire and nurture young dancers toward artistic excellence, and to bring the art of dance, through outreach efforts, to new and multi-generational audiences in the Grand Strand community.

Coastal Youth Ballet Theatre came about through the vision of Liza Mata. Ms. Liza, as she is called by everyone, first established the training school, Coastal Dance Centre in 2005 and as an out growth of her original venture, established the Coastal Youth Ballet Theatre in 2006 as Coastal Dance Centre’s performing company. Prior to this, Ms. Liza had operated two dance schools in the Philippines for twenty seven years before migrating to the United States with her family eleven years ago.

As the area's only performing ballet company, Coastal Youth Ballet Theatre is synonymous with the annual "Nutcracker" production which has been ushering in the holiday season since 2006.  Since it's founding audience numbers have grown and continues to grow, proof that families now make it a point to include the performances as part of their holiday tradition.

Cinderella is a delightful blend of storytelling, humor and all the splendor one would expect from a ballet production. With a touch of magic from her fairy godmother, Cinderella beats her hilariously wicked stepsisters to win the heart of her charming prince.

Choreographed and staged by Coastal Youth Ballet Theatre’s artistic team of Liza and Karen Mata, “Cinderella” is a ballet in three acts and features the music composed by the Russian composer, Sergei Prokofiev, who also wrote the music for the ballet “Romeo and Juliet” and “Peter and the Wolf.”

The production is complete with beautiful scenery and costumes, and performances by the performing company’s finest and talented ballet dancers led by Kiely Clark and Jenny Rogers, who will alternate as “Cinderella.” Hannah Osborne and Madison Lapham are featured as the wicked stepsisters and guest artist Kirk Henning (formerly with Richmond Ballet and Suzanne Farrell Ballet Company), is performing as the Prince. Young dancers as well as teen and adult students from the ballet classes of Coastal Dance Centre, Coastal Youth Ballet Theatre’s official dance school will also take to the stage to complete the cast.

This romantic storybook ballet production promises to be a special treat for the whole family and will make audiences believe in “happily ever after!”

Head to the source at