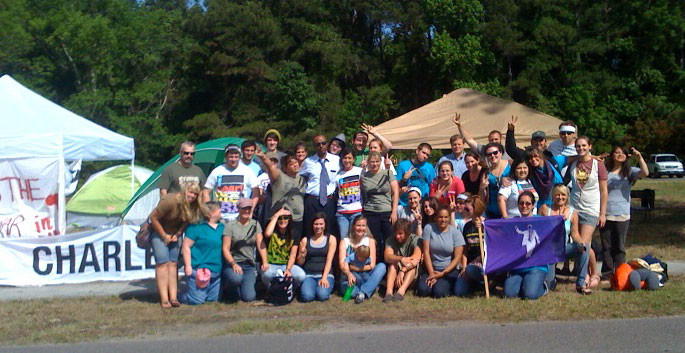 Image by Invisible ChildrenImage by 20090428-camp.jpg The group started out with more than a hundred people, but dwindled towards a few dozen at the end.

The latest from Twitter
Live updates while searching for "#therescue" and Charleston keywords.

First reporting, updates at the bottom:

Dozens of people are camping in West Ashley to get politicians to highlight and acknowledge the plight of children abducted to fight Uganda's brutal civil war.

The group is participating in a global series of rallies and say they will continue to camp until at least one in-office area politician will formally recognize the people of Uganda's plight and come "rescue" the West Ashley group.

If you're unfamiliar with the cause behind the rally, you can learn all about it at Wikipedia, sufficing to say the war is particularly brutal and has been running for more than two decades.

Invisible Children Inc. -- the group behind the rally -- is focusing its efforts on highlighting how young children between the ages of 8 and 14 often hide in fear of being abducted into the guerilla war.

I chatted with Lauren Henke, an official representative of the parent group, and she says they're prepared to stay for several days awaiting rescue.

The local cause had started with more that 100 people, but has since dwindled to about two dozen.

According to the group's Web site, the majority of some 60 cities in the U.S. had been rescued as of 4:30 p.m. Sunday.

All the waiting has earned Charleston a somewhat odd shout out by the group's founders.

In it they call for support and hold out hope for some love from Stephen Colbert.

Update April 28: The rally is continuing as the Charleston group and three others (Richmond, Wichita, and Chicago) across the country await an area politician to acknowledge their cause.

Update April 28, 10:45 a.m.: According to a report on the group's Web site, the campers have been "freed" by a representative from U.S. Congressman James Clyburn office.

I regret that Congressional business in Washington prevents me from coming to “rescue” you in person. However, know that I stand with you in your cause to draw attention to the atrocities committed by the Lord’s Resistance Army (LRA).

As many of you may know, I grew up in a parsonage in Sumter at a time when the South was racially segregated. At that time there was another group known as the KKK that used religion to wage a war of hate against anyone that looked like me. The LRA has misappropriated religion in the same despicable way to push a political agenda. Their tactics are most egregious because innocent children are being ripped from their families and their homes and pressed into fighting an unconscionable war.

Thank you to each of you who have participated in this event to raise awareness about the LRA’s horrific child abductions. As a veteran of civil rights protests, I know that change doesn’t come quickly. I urge you to keep up the fight and know that through efforts like these, change will come.

This video gives a good overview of the situation in Uganda.