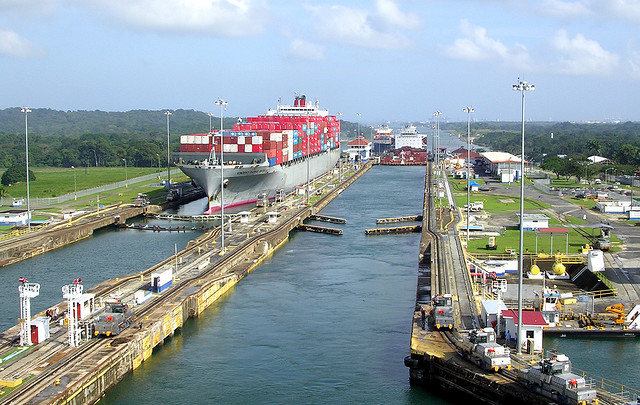 Image by Flickr user roger4336 The Panama Canal will soon be passing larger ships, and ports around the world are scrambling to accommodate.

Update February 23: The House Ways and Means Committee included a reserve fund for the Charleston Harbor deepening project in a list of amendments that passed Tuesday.

The Charleston Regional Business Journal reports that the committee is expected to vote on the amount of money to put in the fund today.

A spokeswoman for the ports authority, said the money would be used for construction costs associated with deepening Charleston Harbor beyond 45 feet. The state would be responsible for about 60% of the total cost — $300 million — of construction. The federal government pays the remaining 40%.

Update February 8: The Charleston Harbor deepening project has been awarded and additional $2.5 million in federal funding which is available to spend on the study during the fiscal year that ends September 30th.

According to The Post and Courier﻿'s breaking report, "The federal funding, combined with a matching amount from the SPA, will cover a quarter of the estimated $20 million cost of the study.﻿"

First reporting: Remember how the $150,000 that was secured to start studying the deepening of the Charleston Harbor to more than 45 feet? Well, the full price tag on the study will likely creep up towards $20 million.

And that's something that's become a lot more doable now that $4.2 million has been marked for the study in the federal governments new $1 trillion spending plan.﻿

Taking large credit for the news is S.C. Republican Senator Lindsey Graham, who also is noting that the text furthers the idea of competitive evaluation so that ports that are easier and more productive once deepened will have a better shot at federal dollars.

Not to be overlooked in that is that the Savannah port is expected to cost almost twice Charleston's price tag to deepen, one that's already a staggering $300 million.

Many reports abound on this one, but my preferred comes by way of tThe Post and Courier﻿; read it here.

The study on deepening the port to get ready for the next generation of mega cargo ships coming in 2014 could take anywhere from two to eight years, and after that a recommendation will be made regarding how deep to dredge the Charleston Harbor — it's a timeline that's not great for Charleston.﻿