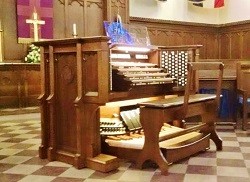 First phase now complete and debuting at service on Sunday

CHARLESTON, SC – The heart of The Citadel’s historic Summerall Chapel is getting a complex makeover. The first part of a three-phase plan to rebuild the chapel’s organ is now complete and extensive sound tests to voice the organ have been conducted.  Now, in its new, hand crafted console, the organ will debut with its new look and sound during the 9 a.m. worship service on Sunday, March 15, as part of Corps Day Weekend.

History of the organ

When the chapel was built in 1936, a 34-rank pipe organ was designed and installed.  Throughout the years, more ranks (complete sets of pipes) were added until there were a total of 64 in 1965. The magnificent organ provided the music for thousands of cadets and visitors at religious services and weddings over a period of 50 years. It was last played in 1985, when that instrument suffered a total failure and an Allen electronic organ took its place.

The pipe organ was left in place for years, becoming further dilapidated due to the humidity and floods of Hurricane Hugo and the college’s Lowcountry marsh surroundings.  In 2005, it became apparent that the Allen organ needed repairs.  The Citadel Class of 1963 began an effort to raise money to restore the music in Summerall to its original grandeur by building a new organ console and adding refurbished pipes from the original one. What was to be a project lasting eleven years or more got underway.

Phase one of the renovations started in July of 2014 and cost $300,000. It was paid for by money raised by the Class of 1963, combined with $200,000 from the Chapel Activity Fund. The cadet chaplain controls the fund which consists of proceeds and donations from weddings and other events at Summerall Chapel.

“The Chapel Activity Fund was established to provide money specifically for the upkeep and enhancement of the chapel, and there’s nothing that I can think of that would enhance the chapel more than to have the organ restored,” said Chaplain Joel Harris, chaplain to the Corps of Cadets.

Spearheading the restoration effort is Mackay Salley, ’63, along with Associate Provost for Academic Affairs Mark Bebensee and Chapel Music and Director of Choral Activities Nancy Lefter.

“The rebuilding of the console included digital components for the stops which will be used until the funds can be raised to connect the pipes,” said Bebensee, who plays the organ for many of the college’s events and services. “That will allow classes in the future to expand the organ, long after this three-phase restoration is complete.”

Fundraising is underway to pay for the $200,000 second phase, which will include the refurbishment and installation of all of the pipes for two of the four keyboards from the 1936 organ. The plan to restore and reuse as many of the old pipes as possible is a money-saving measure that is also the most aesthetically desirable. Phase three of the project is to raise more than $1 million to complete the refurbishment and installation of the pipes for the other two keyboards and all of the pedals as well as to create an endowment that would pay for maintenance.

For more information on The Citadel organ or to make a donation, please contact The Citadel Foundation by emailing laura.jordan@citadel.edu, or by calling Laura Jordan at (843) 953-9078.

Thank you to cadet James McManus, regimental public affairs NCO, for his assistance in writing this article.