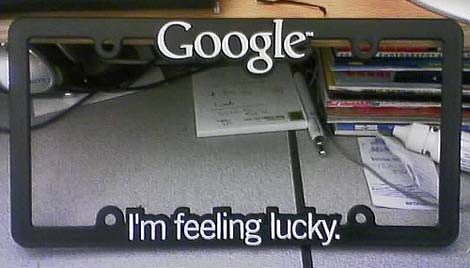 6:45 am on Monday November 24, 2008 | Posted by Ken Hawkins
License plate frames likely not as illegal as you've heard

Image by Flickr user KillrbeezImage by 20081124-license-plate.jpg Likely no need to change your frame -- maybe only your taste.

Was rather disappointed to see a story at my paper alma mater, The Beaufort Gazette, entitled "Got a frame around your license plate? State law says it's illegal."

While on first read of the state law it does appear to agree with that headline:
No other ... tag, sign, monogram, tinted cover, or inscription of metal or other material may be displayed above, around, or upon the plate.

But, if you read a couple of more lines you'll see:
It is not unlawful to place a decal on the license plate if it does not obscure any letters or numbers.

I'm no lawyer, and I'm certainly not offering legal advice, but it seems pretty clear that the spirit of the law is that you can do whatever non-destructive things you want to your plate, provided that you keep it in the right spot on your vehicle and you don't obscure the digits or registration info. I wonder if the lawmakers didn't have the word "encompassing" in mind when they used "around."

And, in the Gazette's own reporting, they picked up on pretty much the same sentiment from law enforcement.

One things for sure, it's a vaguely written section of the law that could probably use some tidying up -- but it's so inconsequential that it probably won't happen.