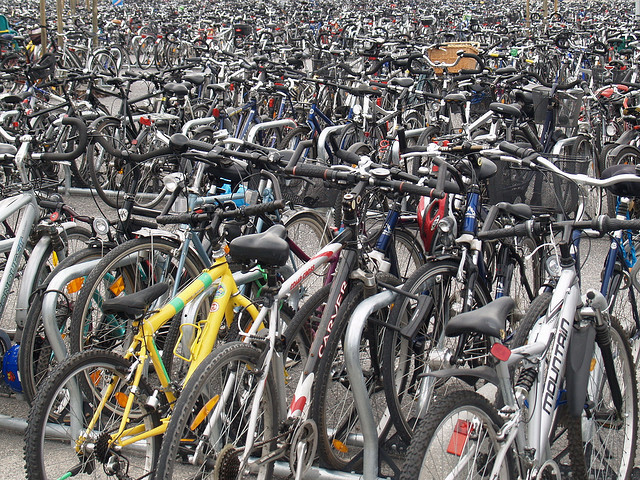 5:59 am on Thursday February 23, 2012 | Posted by Paul Reynolds
For better or worse? International students on their way

Flickr user palestrina55
This could very well be what the local Wal-Mart returns department looks like in September.

To a Myrtle Beach area local, there are several signs of the impending prime tourist season. One is the talk about gas prices. The other is the huge influx of European exchange students that work through the summer.

The touted benefits of the student exchange program are diversifying our culture and exposing the students to American living while helping employers fill their low wage, part-time positions. ﻿Some locals say that's debatable and the negative impact of these visitors doesn't outweigh the positive.

A task force comprised of the City of Myrtle Beach, City of North Myrtle Beach, Horry County, and the Myrtle Beach Area Hospitality Association has been formed to address the issues these 4,000 plus students bring with them. An open conference was held this week to discuss student safety with the International Students Outreach Project﻿ and the U.S. State Department. This year, the City of Myrtle Beach allocated $50,000 in accommodations tax money specifically to deal with the safety issue.

Myrtle Beach made national news in 2010 when an exposé was published on the mistreatment of J-1 visa workers. That report is here.﻿

While the local hospitality industry loves the cheap, plentiful labor pool, there are some downsides to hosting these kids. One big issue is that almost all of them travel by bicycle. Any local pedal enthusiast will tell you our roads and drivers aren't exactly conducive for safe cycling. The municipalities are making a more deliberate effort this year to keep accidents and injuries to a minimum. WPDE has a great write-up with links and more details here. We also reported on WPDE's coverage of the same discussion last year. That's here.

Another question that is always raised is one of jobs. In theory, these students are taking jobs that nobody really wants. Part-time jobs with pay so low that they couldn't be considered a primary source of income. But the reality is that there appears to be no real enforcement of those rules and nothing prevents the students from taking multiple jobs. The Sun News has an extensive report that dives into the jobs and safety issues.

The Sun News also published a Letter to the Editor that suggests that by working in our hospitality industries, we are trusting these visiting students to curate the Southern coastal tourism experience in a positive way. It's a good point and you can read it here.

While both of the primary topics of the talk in the conference was about student safety and students being victims of crime, neither addressed the students that become criminals. As we monitor several data feeds through the summer last year, it's pretty obvious these students start appearing in the mugshot databases .

Do you think working a summer job in Myrtle Beach is an enriching experience for these students? What about for locals?

Have you had positive or negative experiences with the influx of J-1 workers? Comment below.