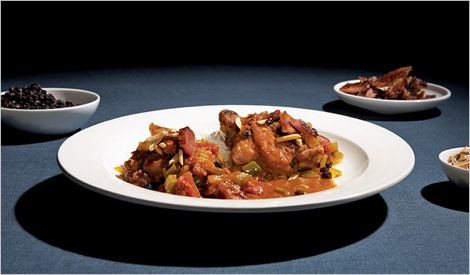 Too often, I think, Charleston sets its sights on New York City for guidance in the world of fashion, food, and fun.

Excuse the alliteration, but it’s true. Swanky -- or wannabe -- Charlestonians aspire to the “City” to the north’s supposed sophistication and culture. We return from NYC visits bearing cashmere scarves and recommendations on new dishes our chefs should serve. We have bright ideas about improving a bar’s atmosphere and bemoan our city’s lack of venues for obscure cinematic indulgence.

This might last a day, or maybe a week. After that, though, most of us feel relieved to be back in Charleston, back in a city that is fashion, food, and fun-oriented, just on a different level than New York.

It’s satisfying to read, then, that New Yorkers, and other urbane folks share our voyeuristic tendencies. Living in Manhattan is great, they say, but for God’s sake, give us quality of life, authenticity, and regional cuisine.

This is where Charleston – along with neighboring Lowcountry cities – gain credence: We have a personal, historic and delicious way of cooking.

The NY Times recently ran an article that expressed affection for our local cuisine -- in particular, the Country Captain.

Country Captain is a dish you’ll find in both places (Savannah and Charleston), though, and throughout the Lowcountry that surrounds them, in restaurants and home dining rooms alike. It has been a staple of Southeastern Junior League cookbooks since at least the 1950s and is found in various forms in older cookbooks as far back as the 18th century. Made correctly, it captures exactly that moment of excitement you can feel when first arriving in the region from far away: a sense that everything really is different in the South, that it is the one last, true regional culture in the United States.

It is, simply, chicken fried in butter or bacon fat, then stewed in the oven with tomatoes fragrant with curry and pepper and served over white Carolina rice. Robert Stehling, the chef and an owner of Hominy Grill in Charleston, who has had Country Captain on his menu practically since the restaurant opened in 1996, serves it with a scoop of jasmine rice and a topping of slivered roasted almonds. (A variation, made with shrimp instead of chicken, was sniffed off the menu by Charleston matrons. “The city wouldn’t have it,” Stehling said. “There is no shrimp in Country Captain.”)

Allegiance dies hard. So do easy targets. The Hominy Grill – don’t get me wrong, I’m a fan – has been featured in the NYT countless times.

Sure, this article touches on various places to find quality Lowcountry fare, but if it really wanted to give an example of Charleston’s culinary breadth it would have done better to showcase a couple other local attractions too.

But I’m missing the point. The gist of the article is the Captain Country, and to let readers know how to cook it, even when they've returned to their homes. It’s worthwhile in that respect, and it’s nice to see the “City’s” most prestigious newspaper talking about our food.

You’ve got to wonder, though, as Charleston continues to grow as a progressive culinary town, how difficult it will be to move away from Shrimp and Grits, or Country Captain dishes, for that matter.

At any rate, let us know what you think.

Where's the best place for Lowcountry fare, or a local joint that stands up to NYC’s finest?

Read the NY Times article here. And, while you're getting hungry, check out our coverage of Charleston's discounted dining scene.