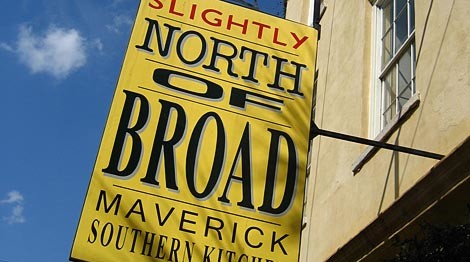 In part:
The menu's prices are pretty standard for a restaurant of this type, with entrees ranging from $23-$34. The cuisine is largely modern-American with an emphasis on local ingredients and specialties. They offer Charleston standards like shrimp and grits ($16.50) and crab cakes ($23.50), along with more exciting choices including sesame crusted tuna medallions ($15) and grilled barbecue tuna with a mustard barbecue sauce and fried oysters ($25). They also offer interesting daily specials in each menu category. ...

Overall, SNOB lived up to it's reputation as one of Charleston's best restaurants. I frequently get asked variations of the question, "I've got a friend/family member coming into town this weekend; where is the one place that they really need to try?" Usually I alternate between FIG and McCrady's, but Slightly North of Broad will now definitely be a part of the conversation. The service was good--despite the busy atmosphere--and the food was almost flawless. If you haven't been to SNOB yet, do yourself a favor and see what you've been missing.

Go check out his whole write-up.

Heiser is the food and film critic for the College of Charleston's student newspaper, the George Street Observer. He has also worked as an intern at the Charleston Food + Wine Festival.