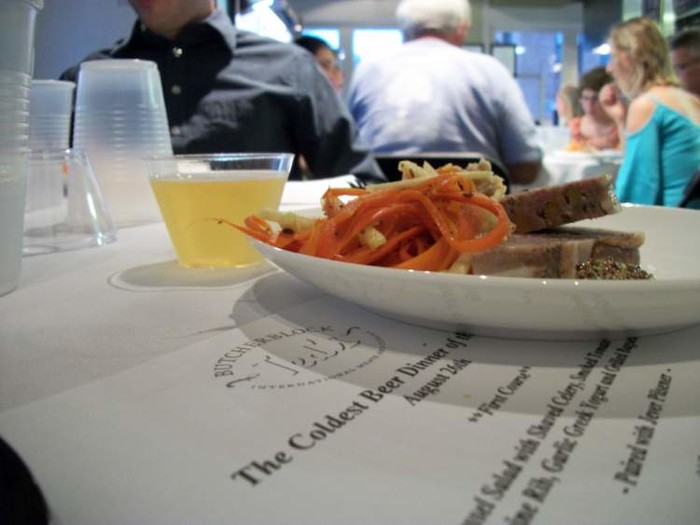 8:46 am on Saturday August 28, 2010 | Posted by
Ted's Butcherblock plays it cool with its annual beer dinner

Charleston beer dinners have come a long way. There are more today, representing a greater variety of food and beer combinations, than ever. But if you want to go to where it all started, to the longest running regular beer dinner in the city, you go to Ted's Butcherblock.

I expect part of the reason Ted kicked off what is now a local craze is that Scott Shor, co-owner of the Charleston Beer Exchange, used to work there. CBX continues to collaborate with Ted on his dinners, whose menus regularly impress and whose prices (with a few exceptions barely worth mentioning) are also the lowest in town.

All that said, I've never attended a Ted's dinner until this Thursday. If you're a regular at this site you know I'm over the moon about craft beer, but weeknight scheduling often prevents me from making it out. What's important is that I finally made it this week for Ted's annual tradition, "the coldest beer dinner of the year," comprised entirely of chilled courses and frosty brews.

Scott made a great point to open the night: beer geeks are quick to point out that craft beer shouldn't be consumed too cold. Some styles are designed to be imbibed at room temperature, but a vast selection of others should still be served above fridge temperature. Serve them too cold and you stifle the nuances and aromas that come with a bit of warmth. What beer geeks often overlook are categories of craft beer that are in fact brewed to be consumed cold and are best appreciated that way.

Luckily, with Scott leading the way, we didn't need little blue mountain ranges on the packaging to tell us if a beer is ready to be opened.

Onto the food and beer pairings

First up: a salad of chilled mussels with shaved celery & romaine rib, tossed in smoked tomato vinaigrette and topped by two pieces of grilled baguette. Great balance here, nothing overwhelming and tons of harmony. The delicate, chilled mussels were devoid of all the saltiness I expected. The vinaigrette was flavorful but not super acidic, and even garlic greek yogurt played a milder role than a garlic spread would have in coating the baguette. The clean & cool dish fit well with the beer pairing, Jever Pilsener (4.9% ABV, B, 59), a German pils packed with noble hops that did as much palate cleansing as it did complementing.

The next dish was an exercise in sweet vs. salty: house-made country pate with bread & butter pickled carrots, ginger apples, whole-grain mustard and candied almonds. This one threw me for a loop, as I'm expecting to be firmly planted in savory territory on a second course. Every component of this one was sweet, save the beautifully fatty pate and the dallop of mustard. It was a little on the cloying side at the end, but in full disclosure I demolished the pate early on (it was pork vs. carrots, sue me). The pairing here was a local staple of mine in warm weather, COAST Brewing's 32/50 Kolsch (4.8% ABV, A-, 52). Its bold, unfiltered character stood up to the dish throughout, working to knock my palate back into balance before going in for more..

Course three was the climax for me, as I think it was for the City Paper's T. Ballard Lesemann (seen here stalking me from across the table). Ted's paprikash-grilled & chilled beef teres major with tahini and lemon fennel, garbonzo beans with dill, and tomato & olive gremolata was simply amazing. Leave it to them to perfect the art of cooking an obscure cut of beef to the perfect temperature for retaining tenderness while chilled. Don't get me wrong, the earthy beans, gremolata, and fennel were all delicious, but I'm adding this beef to my "deserted island" list immediately. The pairing here was the lowest ABV beer of the night, Dupont Avril (3.5% ABV, B+, 73). It was akin to "saison-light," retaining the lemongrass and funky barn notes of a full-on saison, but in a milder presentation (hence the label, "table beer").

Last stop, dessert. Peach and pistachio-cake gelato laid over local muscadines, on a bed of honey panna cotta, topped with three thyme shortbread cookies. In other words, it hit every dessert nerve known to man. I didn't even discover the panna cotta until I got done swooning over the pistachio-cake pieces, my personal favorite in the whole thing. My wife was oveheard saying the thyme shortbreads were "better than girl scout cookies," a compliment for the books. Samuel Smith Organic Cherry Fruit Beer (5.1% ABV, B+, 51) provided a sweet counterpoint here, bringing a third fruit into the picture but still fitting in very well.

This dinner made me wonder why it's taken me so long to get to Ted's for one of these. It was well-priced, quick (we were done before 9 p.m.), and memorably delicious, just right for its weeknight setting. If they can do this much with chilled dishes and beers with reasonable ABV's, the sky is really the limit.

Ted's Butcherblock cuts up at 334 East Bay Street downtown. More pics of the dinner can be found at my Flickr page.

If you'd like to know when the next beer dinner is coming at Ted's, follow them on Twitter @Butcherblock or stay tuned to the beer topic page for lots more Charleston beer news.