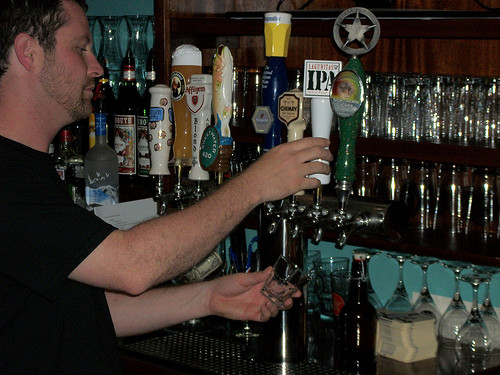 The newest addition to the Charleston-area beer scene, Coleman Public House in Mount Pleasant, had its grand opening on Monday, May 24th.

Located adjacent to The Teak Hut on Coleman Boulevard, just across the street from Finz, CPH (as abbreviated on their t-shirts) aims to to live up to the tradition its name implies.  "Pub" after all is an abbreviation for Public House, which may take a little longer to say but speaks much more directly to the traditional role the establishments played in being the glue of local communities in Europe (most notably Britain).

Olde Europe trivia aside, I was drawn to visit CPH because of the promise of a great tap list.  In a city where we finally have a few awesome bottle shops and distribution for some serious breweries, a tap list is the only thing that gets this beer geek excited about going out.  The tap list was both printed and proudly displayed on the wall, and the wall board was erasable, bringing the promise of (gasp) regular rotation.  All good signs, no pun intended.

Taking a closer look, one notices a few things.  First of all, no BMC -- that's Bud/Miller/Coors for the uninitiated.  Also, no Fat Tire, which seems to make its way onto every craft-ish bank of taps in Charleston.  Not that there's anything wrong with BMC or Fat Tire.  In fact, I saw some Bud Lights floating around the joint, but they were all in bottles.  All of this just points to a respect for the fact that they have sixteen precious spouts from which to pour delicious, cold, beautiful beer, and they don't want to waste that space on anything run-of-the-mill.  Again, good signs.

With all this fantastic beer, a guy has got to eat.  And while I didn't come to CPH for the food, I was pretty impressed by what I tried.  My impromptu posse had its way with the house cut fries with truffle & parmasean ($3.95), the mini lamb burgers ($8.95), and a couple of flatbreads ($9.95), most notably the San Franciscan.  The fries were sinfully good, the lamb burgers had a huge herbaceous flavor, and the flatbread was just humongous.  Unless you're looking for a massive meal, one flatbread and *maybe* an app will feed two.

The burger menu looked pretty serious as well, with 8 8-oz. selections ($8.95 including fries).  I feel sure I'll be coming back to try the Fungi Burger (gruyere, roasted mushrooms, caramelized onions, and white truffle oil).  Even after reviewing what looked like a complete gastro-pub-style menu, I was told that there are over a dozen dishes (scattered among lunch, brunch, and dinner entrees) that would be added soon.

All in all, the grand opening was successful, and I'll be back for new taps and a burger.  There were almost no visible opening-night hiccups -- one tap line was down and the entire menu wasn't available, but that was really it.  If they can maintain this focus and spread the word, I see CPH making it for the long haul.

You can find Coleman Public House at 472 W. Coleman Blvd in Mount P, and you can find the rest of my pics from the grand opening at my Flickr page.