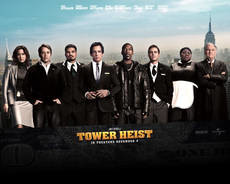 Heist movies are one of my favorite genres, and a good comedy heist movie is a rare beast. One hasn’t been seen in theaters for longer than I can remember.

Tower Heist does not change that.

Admittedly, Tower Heist﻿ isn’t that bad of a movie. It has a few chuckles and some scary looking shots of people looking over the edge of the Tower apartment skyscraper in Manhattan. But other than that, the level of excitement in this film hovers around the level of an afterschool special.

Playing off the Bernie Madoff scandal and the current anti-Wall Street sentiment, Tower penthouse owner Arthur Shaw (Alan Alda) gets busted for a truckload of financial malfeasance, including ripping off the pensions of the Tower’s trusting employees.

The Tower’s manager, Josh Kovacs (Ben Stiller) and a gang of other disgruntled employees decide to go after Shaw’s hidden stash, worth millions. However, in order to pull off the heist, Kovacs brings in a shady street criminal, Slide (Eddie Murphy).

The movie is about as funny as the trailer, which pretty much reveals all the big laughs for the film, leaving nothing for the movie to surprise you with.

That is the primary failing of the film. There are no funny scenes. Sure, there is a joke here, or a laugh there, but no fall down laughing gag after gag scene. For instance, Slide locks his “crew” on the roof to teach them how to pick locks. He gives them all bobby pins…and that’s it. No more. No shivering attempts to pick locks. No broken pins stuck on the lock…nothing. Just a cut to the next scene.

The big draw to this film was seeing Eddie Murphy back on the screen. How long has it been since we have actually seen him acting? It’s seems like forever. There are probably whole generations who know him only as an animated pack animal. And to be honest, the uninspired performance is a cheap rip-off of one of his old Saturday Night Live character.

Stiller is tolerable, but when is he ever more than that? The only bonus is that for a change, his character isn’t a complete wuss. He actually shows some spine in the film. However, it still is Stiller. Yawn.

And that sums up the entire film…Yawn. There is nothing to really excite the audience in this film, unless you are one of those who freaks out about major plotholes and the amazing missed leaps of logic and ignorance of physics. Then you might have fun in this film…No, on second thought, you won’t. It’s just too dull.

I want to thank the staff and management at Carmike 12 in the Myrtle Beach Mall for making my movie-going experiences a great one. For more information on Carmike 12 and current listings, go to www.carmike.com.